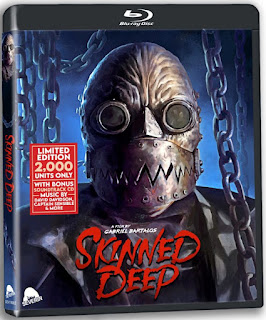 Skinned Deep (2004) is a movie that was memorable for its wonderfully lured cover but I actually never got around to watching. Now, thanks to Severin this early '00s oddity is now available for the first time on HD in the US and restored (more on that later of course). A family is traveling on vacation when they are attacked by a inbred redneck family of murderers. No, this isnt The Hills Have Eyes (1977) or The Texas Chainsaw Massacre (1974).  Gabe Bartalos is maybe not a household name but to genre fans his work ranges from Spookies (1986), Brain Damage (1988), Leprechaun (1993) (probably his most iconic work) and still works today on huge budget productions. He has directed two films to date this and 2013's Saint Bernard (also available from Severin).
This movie had a shall we say interesting reputation during its release onto the home video market. The reviews were mostly bad but the movie has found a diehard fanbase over the years. After finally laying two bloody-eye balls on this film I have to say it really is a work of surreal Dadaist lunacy. Skinned Deep feels like a live-action cartoon version of Tobe Hooper's sundrenched summer slaughter-house classic but this time the black comedy is even more of the bloody-tongue crammed in cheek variety.  Deep is bad there is no getting around it. The plot is aimless, the cinematography baffling at times and the acting is...really something. But, guess what? I freakin loved it! What saves the film is that clearly Gabe and the crew are in on the joke and isn't aiming for anything more than a absurd gore-fest. It also feelings like a loving homage to the wild weird works of Frank Henenlotter. This isnt a shocker considered the two have worked and known each other for so long. In fact, Gabe even worked on what is maybe Frank's most famous film outside of Basket Case (1982), 1990's Frankenhooker. Also its not lost on me that they have a big-brained character named Brian (a pretty on the nose, or rather head) nod to Brain Damage (a movie Gabe worked on). Also, holy shit this movie has a cameo by the one and only Forrest J. Ackerman.
The movie also pays homage to other films like House of 1,000 Corpses (2003) and a very direct reference to the down-under cult classic Fair Game (1986) (ala the scene where Tina is taken for a ride on top of the car). And of course this movie allows Warwick Davis to go absolutely stark raving mad as a character called plates (his murder weapon of choice). Seriously, it is so much fun watching the respected British actor to make a ham-dinner out of the role. He's having a good time with it and so am I. Being helmed by a iconic practical effects you would hope that the SFX would be on point. And yes, they totally are. Gross-out and actually really well done, the effects kick so much ass in this movie!
Skinned Deep is a wonderfully bizarre over-the-top gore-fest that kicks so much ass your Blu Ray player my explode! Consider it a must-watch!
Picture: There isn't any information on this restoration but I have heard that the new transfer was something of a labor of love. I haven't seen the old DVD of Skinned Deep but one only has to watch the original trailer to see the vast improvement here. The clarity is really stunning and you can see right away there is a nice uptick in the overall brightness (like the opening nighttime scene) and colors have been well balanced. Nothing looks overly processed either which is always nice to see. I also noticed a lot of sharpness and depth in things like costumes, sets and locales. Nicely done work from Severin.
Sound: Skinned Deep has a DTS 2.0 track. Dialogue and music comes through very clear and the overall sound experience is robust and healthy.
Extras:  Deep Cuts: A Look Back at Skinned Deep (14mins) A really fun back at Skinned Deep with brand-new interviews with director Gabe Bartalos, actors Karoline Brandt, Jay Dugre, Jake Lee (weapons machinist). Severin always does a excellent job with not only their picture/sound but with providing some great supplemental material.  Also includes a really fun commentary with the cast and crew and, archival making of featurette (22mins) with some great behind the scenes footage and interviews!
Posted by The Video Attic at 10:07 AM