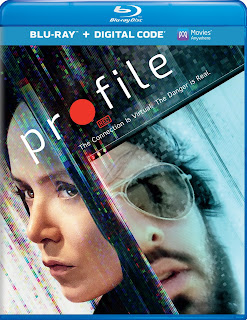 Disclaimer: Universal Studios has provided me with a copy of this film free of charge for the purposes of review. All opinions contained within are my own honest reflections.

Russian born director Timur Bekmambetov has had quite an interesting career, starting out in indie films and working his way up to making the big-budget Ben Hur (2016) which sadly flopped at the box-office. Profile was made on a hugely reduced budget than Ben Hur with a 2.3 million dollar budget (somehow) and only earned 1.8 million.
Profile from 2018 obviously wasn't but feels like a movie made during the pandemic as its a 'found footage' using Skype and screen grabs not unlike Unfriended (20014) (also made by Universal). Indeed, its interesting watching it in an era where Zoom and Skype meetings is the new normal and people are still working from home almost two-years later. So this movie has a pretty good story and Bekmambetov does his best to create tension and engagement within the construct of the films central gimmick. To be totally frank sometimes it works well at times and other times the format is very limiting.I was pretty amazed that this movie cost 2.8 million dollars because its largely comprised of screen-shares and not even any big set pieces. I have seen bigger better looking movies made on a fraction of the cost. On a side note I am kind of curious about this production history. In the movie they reference a film called Pride (2014) so I assume 2014 was the year it was filmed and yet the release date was 2018 (assuming the theatrical date) and now finally getting a wide home video release three years later.
What is really the glue that holds this somewhat uneven film together is the cast. Valene Kane I think carries the film and I think does an outstanding job, especially given the limitations of acting alone over Skype for almost the entire film. She really does a lot with the role and I really felt like she brought a utterly real and raw performance.  Shazad Latif is equally as good and his charm goes a long way into making it believable that he could entrap women the way he does. But, you still find yourself beguiled by him which is the mark of a truly great performance.
Profile is a fairly good thriller that is engaging enough for a watch but nothing that I feel is memorable.  I will say that the performances are top-notch and I did find myself enjoying the gimmick which I admit I am a sucker for. Though, I can understand it not being everybody's cup-of-tea. Would watch again but its frustrating that the thriller aspect was not embraced as much as it could have been. It feels like a solid movie that could have used an additional draft.
Picture: Profile looks nice and clean on 1080p. The film is of course is entirely comprised of online chats, screenshots and Skype calls so we of course get roughness of this aspect of it. This does have a nice pristine sharp definition nonetheless and a nice uptick in brightness which is good when your looking at screens for the entire movie.
Sound: Profile for being a non action heavy blockbuster does have some big booming moments and this is why I am happy that we get a nice DTS 5.1 track. Dialogue comes through nicely and the areas where there are some huge bombastic sound really pack a punch here. Nicely done overall.
Extras: None
Posted by The Video Attic at 11:52 AM