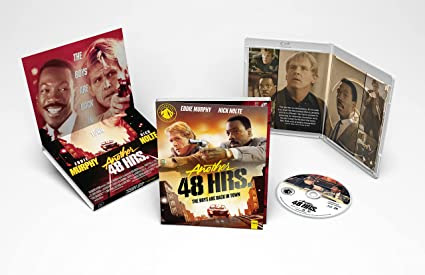 My Review for 48 Hrs. HERE
After 1982's 48 Hrs. made a huge profit and launched Murphy into superstardom it was going to be only a matter of time before a sequel was made. Oddly though, it took eight years to fans were finally reunited with the gruff Nick Cates (Nick Nolte) and the wisecracking Reggie Hammond (Eddie Murphy). This gap between films was due to Murphy's sudden popularity a whooping eight films and a few specials between the original and its follow up. Nolte and Hill were also very busy in this period but finally they got it made. Made on a bigger budget of 50 million Another 48 Hrs. did make over one-hundred million dollars over its budget but was still considered a disappointment.
Sequels typically have a hard time re-capturing the magic of the original. Indeed, both Hill, Murphy (with a huge salary increase) and Nolte were back but...it wasn't the same. Hill admits that the production was rushed and it shows. And it certainly shows in the final product. In my review for the first time I mentioned how the original 48 Hrs. had this grittiness that in my opinion helped the film stand out among the other buddy-cop romps. Sadly, Another 48 Hrs. attempts this again but it somehow ends up feeling tamer. Worst of all the narrative is on the flat side. What we get is some stitched together plot elements and a lot of re-trending familiar jokes and set-up's from the first film. It's not that I think Hill does a bad job at directing and there are some inspired action set pieces. The issue is it doesn't feel fresh and it fails to bring the magic of the first outing. Its worth noting that the movie thankfully holds back on the more problematic aspects of the first film and I think its all the better for it.
Murphy and Nolte are great and I think they are the element that makes this movie watchable. The pair have an undeniable chemistry together and some of the more physical humor is maybe the best things in the movie. There is even some nice call-backs to the first film and I think that as meh as the story is the duo end on a satisfying note. Its a shame that a third film wasn't greenlit because I think this series had life in it. Again the movie was far from a flop making three-times its budget. But, who knows somebody will probably reboot it soon.
Picture: Much like the 82' 48 Hrs. Another 48 Hrs. has been remastered in 4k from its original 1:85:1 aspect ratio. The results, similarly to the first film is outstanding. Paramount has once again taken an older catalogue title and given it a much needed refresh. Colors again really pop in this transfer and the film overall retains a nice level of clarity and high detail in costumes, locales and sets. Grain is natural looking and smoothed out to where its not distracting or overt.
Sound: Another 48 Hrs. much like the first time also includes DTS 5.1 lossless soundtrack. And again this packs a huge punch in terms of dynamic range. Here we get in my opinion a full bodied and complex audio presentation that showcases the movies action.
Extras: Another 48 Hrs. includes a Filmmaker Focus: Walter Hill, which like the first 48 Hrs. is a insightful and interesting interview with Hill.
Posted by The Video Attic at 12:32 PM