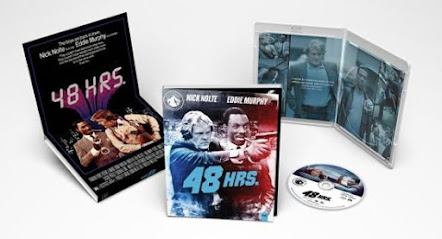 Walter Hill had quickly established himself as a force in Hollywood making interesting genre fare like The Warriors (1979) and Southern Comfort (1981). He was given a big studio job with 1982's 48 Hrs. a movie that would be make or break for the budding filmmaker. Thankfully for Hill the movie was a hit grossing nearly 80 million on a 12 million budget. It also was the big screen debut of Eddie Murphy who was sizzling hot from Saturday Night Live. Hill not only direct some stellar movies but produce classics like Aliens (1986).
Grizzled cop Jack Cates (Nick Nolte) paroles a wise cracking, street wise Reggie (Eddie Murphy) in order to hunt down a cop killer. Cates is given just 48 hours to use Reggie's skills. Now, they team up to follow the clues, track suspects all whilst trying not to kill each other. Hijinks ensue in this classic early '80s that propelled Nick Nolte and Eddie Murphy into super stardom.
Nick Nolte and Murphy seem like an odd pair on paper but Hill must have known better as the two have an undeniable chemistry together. Nolte plays a perfect straight man to Murphy's more outrageous and explosive personality. I honestly think its one of the better 'buddy-cop' duo's (even though Walter Hill doesn't consider this a buddy-cop movie).  Hill reunites with The Warriors  co-star James Remar (Dexter) who is fantastic as the movies heavy. David Patrick Kelly another Warriors alumni also shines as the sleazy Luther.
Like a lot of movies from the '80s, 48 Hrs. has a lot of dated, even downright uncomfortable elements. Overt racism, racist slurs and, the old stand by homophobic slurs. Hill has stated in interviews that he wanted to introduce this element of racial tension and, I can see what he was trying to do. It still doesn't feel great to hear racist speech that were written by a white man, directed by a white man and hurled at an African American man. To me I think a clever writer and director could introduce these themes without being quite so overt.  Nolte's character does apologize for using racial slurs but of course the homophobia seem to be fine in the films rough-tough guy context. The way this was normalized in the 60's-'70's and '80s in movies (especially action) is stomach turning in my opinion. Also, before you @ me I've actually had a lot of hateful homophobic slurs directed towards me. I want to stress that you can still enjoy this movie and not support the more dated aspects. But, I feel its worth calling out in the discourse.
I really enjoyed the movie (apart from the above mentioned) and I think that  solid premise that is made by its cast with Murphy cementing himself not only as a break out comedian but as movie star. The movie is funny but Hill doesn't shy away from some darker elements which makes this a bit more interesting than most movies of its ilk.
Picture: 48 Hrs. is presented for the first time in the US in a brand-new 4k scan. And, all I have to say about that is, WOW! Barring a UHD release in the future this is without a doubt the best this movie has ever looked on home video in my opinion. There is a noticeable uptick in clarity and colors pop-yet, the film retains a nice natural, even warm look. In short, Paramount thankfully didn't over-work or over process this transfer. Color tones strike a nice balance and everything seems to fit Hill's original vision for the film. Honestly, even if you own the movie in HD already I am confident in saying I think this is well worth the upgrade. Paramount has really done a fantastic job with this release!
Sound: 48 Hrs. packs a damn big punch with its Dolby TrueHD 5.1 lossless track.  The track takes full advantage of the high-flying big action, effects design and sizzling hot soundtrack. Spacing is well done and in my opinion the film has a nice 3D sound presentation. Paramount delivers a very solid track that pars perfectly with its upgraded picture.
Extras: 48 Hrs. features a new bonus Filmmaker Focus: A new interview with Walter Hill
Also includes a short original animated short Space Kid (1966) and a Trailer.
Posted by The Video Attic at 12:00 PM