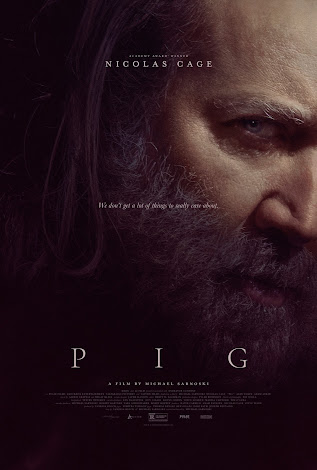 Love or hate him, Nicolas Cage is an actor that is anything but boring. Indeed, the actor has of late been leaning into his eccentric persona and has been making great movies like Mandy (2018) and Color Out of Space (2019) and also so-bad-its-fun fare like 2021’s Willy’s Wonderland. Personally, my respect for Cage comes from how he never plays it safe both in film choices or his Dadaist approach to acting. It’s why I jumped at the chance to review his latest offering, Pig (2021). Pig tells the story of a lonely grizzled man named Robin (Nicholas Cage) who lives in an isolated cabin with his prized truffle pig. Late one-night, men come into his cabin, knock him out and steal his porky pal. Now, Robin aided by his business partner Amir (Alex Wolff) must hunt down his truffle hunting pig. For anybody expecting a fun-John Wick style action/thriller only with a pig instead of a dog you will be sorely disappointed. Sarnoski’s film feels like a premise built around a gimmick instead of the other way around.

The directing shows flairs of brilliance, but sadly, Pig has the stink of writers with no previous experience with long form narrative. Themes, motifs and threads feel present but never are pushed or explored far enough to feel complete or effective. The end result is a movie that tries to say things about food-culture and the comfort and impact it has on us but never in a way that leaves a lasting impression. The film seems to suggest some interesting world-building. For example, there is a very short-lived sub plot involving some underground illegal fights between cooks. This is baffling as it’s in no way connected with the rest of the film, nor does it really pay-off later. The other issue is that it never builds a bond between Cage and the titular swine, thus I found it difficult to get emotionally invested. This is where Wick is brilliant in its writing. Not only is it easier to connect with a puppy, but emotional weight is added because we know that the dog was the last gift Wick’s late wife gave to him. Sarnoski adds nothing like that and it left me feeling cold and indifferent. Maybe worst of all, the movie is dull. Pig falls into the area of not thriving on its own good writing yet also never hits that sweet spot of campy or so-bad-it’s-enjoyable.

But, just like me, people are going to check this movie out because of its lead actor Nicolas Cage. If you were expecting a big bombastic performance from the Oscar winner, you will be disappointed. However, I think that this more somber, restrained approach works within the film’s melancholic worldview. You cannot help but be transfixed by the actor, and for me it’s what made it mildly interesting. Alex Wolff, best known for films like Hereditary (2018) and Bad Education (2019), is also great in the role and Wolff and Cage actually play well off one another.

Pig is a movie that feels like it should be a big-fun film, but director Michael Sarnoski takes a bleaker route. This would be perfectly fine but for the fact Sarnoski and co-writer Vanessa Block (both of whom never wrote a feature before) never connect the dots in terms of meaningful character development, engaging world building and emotional weight. The result feels like a flat and rather dull outing.  This little piggy could have used a script-doctor.