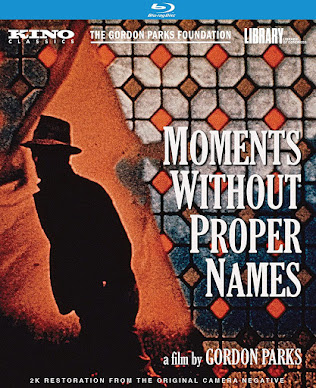 Gordan Parks may not be a household name but, if you are even slightly aware of genre-cinema you`ve no doubt seen his work. Shaft (1971) was a worldwide hit and, for many it truly kicked off not only the  '70s action genre but helped create a slew of imitations. But before he directed films he was award-winning photojournalist author, poet and composer. In this heartfelt and moving documentary, Parks looks inwards at his life and career in this highly engaging work. While the film is a documentary it certainly isn't one in what you might call a traditional one. First off the film doesn't really lay things out in a way that is structured like any documentary I've ever seen. In fact, we only really ever get glimpses into the actual life of Parks. It's more about finding the man through his work.

Actors do dramatic readings of Parks work which I thought was a really engaging and interesting way to give the audience a sample of the author's work. Certainly, it's better than a simple narration. And, of course the  stoic Parks himself talks about his early life and his career. Though, again this is not laid out like a bio-doc but, its rather a poetic stream of consciousness. You defiantly wouldn't want to watch this if you were writing a book report.  But, I love how bold it is and that it doesn't feel the need to give you a dry-traditional bio-doc. Some wanting to really learn about Parks in detail may find this frustrating but I think you gain something incredibly deeper and richer.

Moments Without Proper Names is not a heartwarming, feeling good film as it tackles subjects like war, poverty and systematic racism. These themes sadly still apply today. It's a personal, haunting and fascinating glimpse into Parks without going the traditional bio-pic/doc route. I hope that people will give this a chance because I found it a worthwhile exploration.

Picture: It looks like Moments was shot on 16mm and according to was restored in 2k from original camera material. The movie certainly looks as if it had a nice uptick in brightness. This is a tricky movie to review transfer wise since the doc uses some stage bound actors (reading poetry) so, its nothing that is visually that stunning or indeed cinematic (which is not a criticism). Thus, its a bit more difficult to gage the range color palate wise when the film was by design minimalistic. I can certainly tell though that the movie which is over thirty-years old at this point has been cleaned up with very little to no artifacts or scratches in the film. Overall, I can't imagine the movie looking this good in previous releases, indeed if there were many home video releases to begin with. Kino is a label that always sets the bar very high for their restorations and Moments Without Proper Names is, in my opinion produces a very solid 2k presentation. Fans of this film or those wanting to discover for the first time (which was the case with me) will, I think be pleased with the results.

Sound: Moments has a DTS 2.0 track. Again, the movie isn't really sound effect heavy but replies on its narration, interviews and actors reading some of Parks poetry. The sound is well done and dialogue and spoken word comes through nicely without any unwanted background noise.

Listen To a Stranger (19mins) An interview with Gordon Parks.