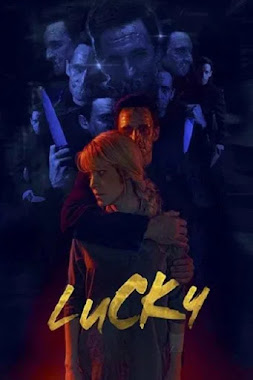 Plot Summary: In LUCKY, life takes a sudden turn for May (Grant), a popular self-help book author, when she finds herself the target of a mysterious man with murderous intentions. Every night without fail, he comes after her, and every day the people around her barely seem to notice. With no one to turn to, May is pushed to her limits and must take matters into her own hands to survive and to regain control of her life.

Natasha Kermani and Brea Grant are not house hold names....yet! But mark my words, they will be a force in horror or indeed any genre they choose. Lucky (2020) is a film that has gotten both negative and positive reviews. And yes, I think either you are down to fully immerse yourself in Kermani and Grant's strange world they crafted or your not. If it's the latter I feel sorry that you have boring tastes in movies.  For me I was totally on board with diving head first into Natasha's wholly unique brand of horror. Lucky is powerful in that it is fearless in how it expertly weaves themes of gaslighting, the MeToo movement and the silencing of women. When I interviewed Natasha she also confirmed that this movie also talks marketable feminism, a subject that rarely gets discussed or satirized in cinema period, let alone a horror film.

On a very surface level the horror comes from the nightly attacks YET for me thats not what's really so horrifying is the why nobody in May's life believes her. Even her fellow female friends cannot or will not do anything to make the situation any better. As you can tell that films message is not at all subtle but I am perfectly fine with that because it's a message that is still timely and sadly, still very much needs telling. Regardless of where you fall on the gender-spectrum this movie will and should make you feel just as angry and frustrated and frankly as terrorized as the lead actor. Grant's script is also darkly funny and there is a real dry-sardonic humor which elevates the material further.

On a technical level Natasha Kermani directs this film with the confidence of a seasoned director but also with the kind of love and energy from a newcomer.  The film was made on a budget but has a clean, polished look thanks to a good production design by Lindsay Minnich (Every Secret Thing) and interesting cinematography by Julia Swain (Speed of Life) and great editing.  I would also be remiss if I didn't give a shout out to the perfectly bizarre score by Jeremy Zuckerman (Horse Girl).

Brea Grant who also wrote the film does a fantastic job as May. Grant not only created this brilliant allegory but embodies the the lead with real pathos. Also features a great supporting cast including Hunter C. Smith, Dhruv Uday Singh, Yasmine Al-Bustami.

Lucky feels like a modern day Twilight Zone episode and has the kind of creeping existential dread that stuck with me long after the credits rolled. A-Must-Watch!