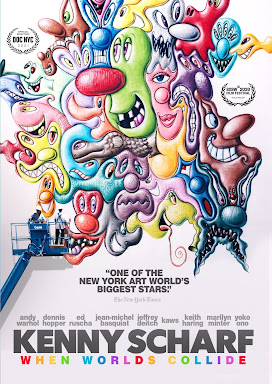 Long before Banksy would take street art to the masses, a handful of graphic artists ruled the scene including Keith Haring, Jean Michael Basquiat and Kenny Scharf. When World's Collide (2020) tells the story of graphic artist, and pop culture who came to New York in '79 and dominated the '80s with this creative pop-culture creations. The story documents not only the artists work but also his friendship with Keith Haring and Andy Warhol which is told through new interviews, rare photos, videos and archival recordings and interviews.
I had seen Kenny's work before but, if I'm being honest I was not that familiar with his life or, really knew his story. Worlds Collide is not only about the artists but also a rare snap-shot into '80s pop-art world. It was also really interesting to hear how Kenny and Keith Haring actually started together and formed a friendship. Sadly, Haring's died of AIDs and the film also briefly touches on the impact the disease had on the art-world. This is an aspect of the doc that I wish they had explored a little bit more. Indeed, as much as I loved the latter half that shows where Kenny is currently in his life and work, I felt like the filmmakers quickly skipped over the art scene in the '80s. This is where I think the film does a disservice because it feels rushed. Like, I wanted to explore more about Kenny in the '80s.
Overall, its a worth while documentary about a artist that doesn't get enough credit. Where I think the film suffers is it touches on some really interesting topics in regards to both the art movement and Kenny's life in the '80s but skips through a lot of it. At a scant 80 minute I could have used another 20 minutes or so. Ultimately, the movie does a good job at summing up the artists life and work but in a very condensed way.
Picture/Sound: When Worlds Collide is most likely shot on a HD camera and therefore looks good even in a lower-def format like 720p. New interviews have a nice look to them and even archival footage looks like it benefits somewhat on DVD.  Sound wise this has a DTS 2.0 track. Dialogue comes through clear though I found myself having to crank to volume so the sound presentation is good but not as robust as you might want.
Extras: Trailers
Posted by The Video Attic at 12:37 PM