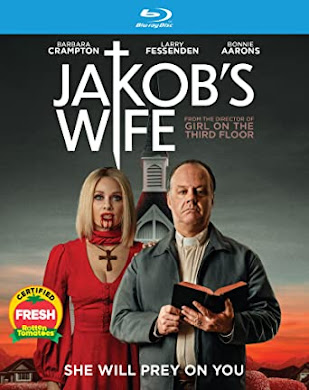 Travis Stevens made a pretty interesting feature film debut with Girl on the Third Floor (2019) and almost instantly made a splash in the horror community. His follow up film also seems to be on the way to become a sleeper-cult classic. Jakob's Wife (2021) tells the story of mousy wife named Anne (Barbara Crampton) and her husband Pastor Jakob Fedder (Larry Fessenden). Anne is feeling crushed in her marriage until a old flame comes to town. She unwilling is bitten by a vampire and is refreshed and re-born but, also thirsts for blood.
While I thought Girl on the Third Floor was ultimately an entertaining enough first film I did feel like it was a bit rough around the edges in the narrative department. Jakob's Wife isn't perfect but its a really well crafted and a pretty fun spin on the well-worn vampire mythos. The movie is of course first and foremost a horror film but it actually has a lot going on. Sexual repression, frustration and feeling unfulfilled in a marriage are all things that a lot of married people go through, especially ones that are married for as long as Anne and Jakob. While the themes and motifs are by no means subtle they are extremely well woven into the overall narrative. I was happy to see that the movie is not only a heavy throwback to the early splatter of Peter Jackson but it also  has a richly constructed screenplay to work off of.
Steven's also brilliantly casts this movie with the Queen of horror Barbara Crampton and cult-filmmaking director, producer, writer and actor Larry Fessenden in the lead roles. Crampton is of course a delight and knows exactly how to walk the line of almost over-the-top without ever actually crossing it. Really who doesn't love to see Barbara in anything. Larry Fessenden, like Crampton finds the sweet spot and his performance is  nuanced. The two clearly have a good chemistry together and they play off each other nicely. On a technical level Stevens clearly directs with a level of confidence that is staggering for someone only on his second feature film. Jakob is also extremely well photographed, edited and features a moody score that I want to own.
Few horror movies tackle themes of discontentment in life and in a relationship, especially in such a fun and interesting way. Again, the subtext is more just text but I think its well written enough to get away with not being subtle about it. This movie had a lot of hype around it and I am so happy to report that it every bit lives up to it. It will leave you with a big bloody smile by the end credits!
Picture: As always RLJE provides a top-notch 1080p transfer. The movie was most likely shot on digital therefore its no shocker that it looks great on HD. Jakob even has a film like grain texture that was nice to see present. Overall, a very nice presentation.
Sound: Jakob's Wife has a DTS 5.1 track. While not action heavy this movie does have some moments where the 5.1 gets to shine. Dialogue, score and effects come through in a healthy and even robust times in my opinion.
Extras: Includes a Making Of and Deleted Scenes.
Posted by The Video Attic at 9:15 AM