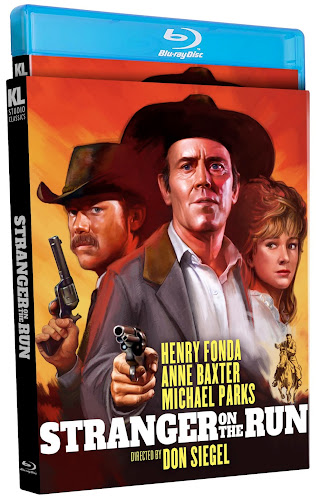 Henry Fonda was certainly no strangers to the western genre. In fact between television and film he starred in over one-hundred of them dating back the late '30's.  By the late '60s the western was in a weird place having found popularity on television and, would find must love in Italian kicking off Sergio Leoni's A Fistful of Dollars in 1964. The latter may have promoted a sort of return to old-school westerns but with a gritter counter-culture flare. This made-for-television movie see's the legendary Fonda as a drifter searching for a woman and, is framed for her murder by the corrupt local law enforcement.
I will never understand how a legendary director like Don Siegel made some iconic films but was never even nominated for an Oscar. The director had been working for over twenty-years when he was tasked with directing Stranger on the Run and it certainly shows. I think made-for-television movies get a bum rap as being cheaper and maybe more shoddy affairs than their movie counterparts. While it's true MFT outings are typically lower budgets Stranger doesn't suffer for it.
Siegel brings his A-game and directs with movie with the same spark and passion that he did with his other theatrical releases. The director who was over fifty by this time brings the zest of a man half his age and you can tell that he has a lot of love and experience for the westerns. And, wanting to tell stories about tough-guys and brave underdogs would be something echoed throughout most of his filmography. The story is effective in how it does a lot with its simple set-up. This leaves room for character arc's and some nicely directed set-pieces.
Henry Fonda truly was an inspired actor to get and, outside of maybe James Stewart I couldn't think of a better actor in what is a love letter to the western genre of a bygone era. Fonda's skill and charm is in full force here and does a lot with the role. The movie also has an excellent supporting cast including
Anne Baxter, Michael Parks and Sal Mineo and legendary character actor Dan Duryea (best known for his noirs) who would pass away a year after the movie was released. When you watch Duryea its bitter sweet because his character of an aging cowboy is echoed in the aging actor looking back on his glory days.
Stranger on the Run sadly is confined to television censors so it never gets to push the boundaries like a lot of other counter culture films. However, genre-purists will likely enjoy how the film feels like something that could easily been made in the '40s or '50s gather than the late '60s. The movie is flawed with some obvious budget limitations but, Siegel does a very solid job and brings in a entertaining film.
Picture: Stranger on the Run is presented in its original 1:33:1 aspect ratio and sports a new 2k transfer. And, wow I think its a fantastic presentation. The level of detail and clarity is great and colors pop and outdoor scenes look lush and vivid. Skin tones have a warm natural look to them and thankfully the transfer doesn't look over processed or worked. Grain is light and well smoothed throughout. I can't imagine this has ever looked this good before.
Sound: Stranger has a DTS 2.0 track. Dialogue comes through strong with a nice range overall. A very nice audio presentation that does the film justice in my opinion.
Extras: Stranger features a commentary track by film historian/screenwriter Gary Gerani. Gerani does a fine job at discussing the film, its actors and director in detail. Well researched and worth a listen.
Posted by The Video Attic at 10:06 AM