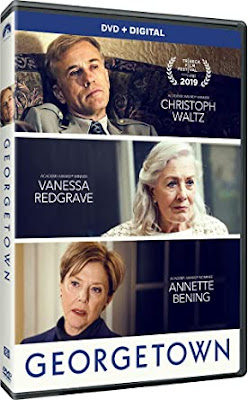 Christoph Waltz makes it directorial debut with 2019's Georgetown. The film received mixed to lukewarm reviews. It has finally landed on home video with a DVD release. Partly based on true events, Georgetown tells the story of a wealthy DC socialite in her nineties named Elsa (Vanessa Redgrave) who, after losing her husband re-marries. She has the bad luck to marry social-climber Ulrich Mott (Christoph Waltz). When Elsa is found dead, Ulrich is the prime suspect. What ensues is a
So...I really wanted to like this movie. After all it has a star-studded cast which not only includes Christoph Waltz but the legendary Vanessa Redgrave and Annette Benning. Sadly, the film is a mixed bag at best, leaning more towards a dud. It's baffling because Waltz direction is fine and, as I said the cast is top notch. I think the real issue lies in a screenplay that feels sorely underdeveloped. The film tries it's best to flesh out and develop characters everything still somehow leaves you wanting more on all fronts. Waltz's big-over-the-top performance is yes hammy yet captivating to watch. You cannot say the movie isn't engaging, especially thanks to the cast but, by the end credits I was left feeling wholly unsatisfying. Though as I said it attempts and at times succeeds at giving us insights into these characters it still felt like everything was shallow and lacked depth. Not to mention poor Annette Benning isn't given nearly enough to do here. Her role is short and she is sidelined to nagging daughter.
Georgetown reminded me a little bit of 2011's fantastic film Bernie which has a few similar plot beats (but ultimately very different) and, I couldn't help but think that Georgetown really lacked the focus, tight structure of the former. It's a shame because I think at its core there is a really interesting story yet, due to a underwhelming screenplay and, though I think its well directed I can certainly see that Waltz struggles to find what's so compelling about this story and its characters. Its fun enough for a mindless watch but I think had it been nurtured more it could have been something special.
Picture/Sound: Georgetown to date as been only released in a DVD format. While the picture doesn't have the sharp definition of HD its not bad looking by any means. I think that shooting on digital and upgrading to any digital format even 720p you still get a quality picture -but again, its far from perfect. There seemed to be a glitch or two that cropped up during the film. It's not a big blockbuster that needs a HD release and, for the price its not a bad way to go as DVDs go. Like the movie itself its solid but has room for improvement. The sound quality is also good and dialogue and sound design comes through nicely.
Extras: None
Posted by The Video Attic at 8:33 AM