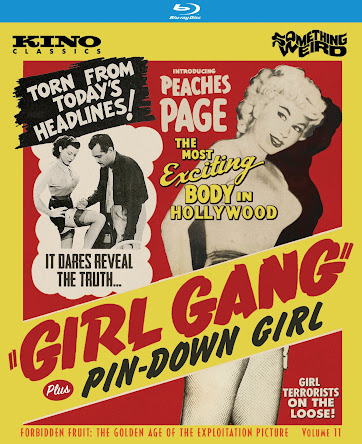 Crosses, double-crosses and low-down no good gangsters and bare-fleshed women populate Robert Dergano's first feature film. Calling Pin-Down Girl a movie is probably pretty generous since it's a bare-bone story which is just an excuse for bare-flesh and fetish-wrestling. And, you know what? We wouldn't want it any other way in this '50s kitsch.  The film is fairly notorious for being featured on MST3K under its alternate title Racket Girls which helped the movie gain a loyal cult following. I rag on the script but its actually a fairly engaging little sleaze-fest and one that is fun.

Picture: Kino Classics provides Pin-Down Girl in what I am sure is the best it has ever looked to date. Though the movie does have some artifacts and scratches you can see the image is much clearer with a nice uptick in clarity. And, you know, do you really want a grimy fun exploitation movie without some rough around the edges flaws? In my mind this is the perfect intersection of high clarity but also still has the look of peepshow dirtiness.

Sound: Like its picture Pin-Down Girl impresses with a robust and incredibly strong DTS 2.0 track. Dialogue comes through clearly, as does the sound design.

Extras: Pin-Down Girl has a feature length commentary by Eric Schaefer author of Bold! Daring! Shocking! True! A History of Exploitation Films.  Schaefer does a great job at laying out history of the key players in the film as well as its hilarious pit-falls. A really engaging and fascinating track that is worth checking out.

Another film by director Robert C. Dertano and produced by the infamous George Weiss (who produced Glen or Glenda and was portrayed in Tim Burton's film Ed Wood). Girl Gang is a classic '50s 'scare-film' that depicts a sleazy gang leader using women who he hooks on drugs to do petty crimes. Dertano's Girl Gang is as cheesy, low-budget and clunky as you might expect-however, it has some pretty shocking scenes for the time. For example, Gang has a basically step-by-step guide to shooting up heron. Still, the movie has its kitsch charms and is pretty entertaining.

Picture: Like Pin-Down, Girl Gang is pretty incredible looking, especially for the films age and film elements. The movie is not pristine with some scratches but you can really tell an uptick in clarity and an overall. And, even though I mentioned some artifacts there really isn't much. Its incredibly impressive.

Sound: Girl Gang has a small amount of background hiss but overall is a strong DTS 2.0 track. Dialogue and sound design comes through nicely.

Extras: Includes a feature commentary by film-historian Alexandra Heller-Nicholas. Nicolas who is no stranger to commentaries (an author of nine books) and as always, she does a fantastic job. Alexandra takes a deep dive into the themes, the cast and filmmakers as well as the gender politics. The latter I think is the most interesting aspect of the track. Nicolas is also very enjoyable to listen to and she clearly loves what she talks about and is well researched! I honestly cannot say enough great things about this track.