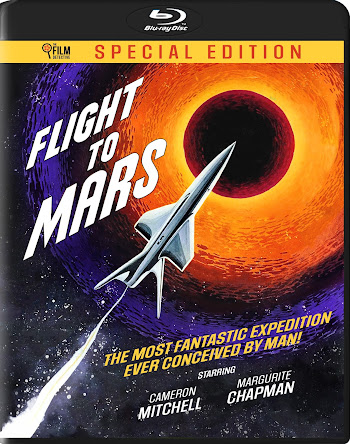 Reviews For Other Film Detective Releases: Hercules and the Captive Women HERE
Review for Giant from the Unknown HERE
Review for The Other Side of Madness HERE
Review for The Sin of Nora Moran HERE
I've always had a special place for genre cinema, like horror, action and science fiction. Recently I have been trying to fill in my gaps of '50s atomic-age sci-fi and, thanks to The Film Detective I can cross Flight to Mars off my list. Cashing in off the success of films like Destination Moon (1950) and Rocketship X-M (1950), Flight to Mars released in 1951 tells the story of a journalist named Steve (genre icon Cameron Mitchell) and a plucky crew of astronauts find life on the Red Planet in this early '50s sci-fi outing.
Lets be real, Flight to Mars isn't ever going to be go down as important in the genre as say, Forbidden Planet (1956) or The Day the Earth Stood Still (1951) also released the same year. However, I think it earns its place firmly in the genre due to it being among the earlier examples of Mars based sci-fi films. Director Lesley Selander made over one-hundred films in his career though he worked mostly in b-level films for poverty row studios. I mention this because Mars is technically not a badly made film but its a rather run-of-the-mill pulpy genre stuff. The movie weirdly languishes in drama over fun space-adventure. Still, I think there is something really charming about the low-fi sets, the cheesy costumes and hammy acting. The cast is great with cinema vet Cameron Mitchell giving the movie a polish.   I just wish the filmmakers either punched up the plot or leaned into the camp-value. As it stands Flight to Mars is a footnote in the genre that is worth while but doesn't ever reach the heights of other similar films with better scripts.
Picture: Flight to Mars is presented in its original 1:37:1 aspect ratio and restored in 4k using original film elements. Mars has been presented on both DVD in 2002 (and currently OOP) and now on Blu Ray thanks to The Film Detective on 1080p. I am happy to report that this film has never looked better. There is a noticeable uptick in brightness and therefore I think the clarity is the best its ever been. There are also no scratches or artifacts to be had. There are a few pit-falls but very minor. Grain levels are on the heavy side and some images tend to look a bit washed out in some moments yet in others it looks sharp and crisp. This is no doubt due to the original elements. Also, as I said these are minor and overall I think this is really a stellar looking presentation.
Sound: Flight to Mars has a DTS 2.0 track. Like the visuals, the sound is really handled well. Dialogue comes through fairly strong though I will say there were times when I found myself needing to turn up the volume. The sound design is however pretty robust and does a lot with a front heavy channel.
Extras: As always The Film Detective does not half-ass their releases. Included is the following: An audio commentary track with Justin Humphreys
Also includes is two exclusive documentaries produced by Bollyhoo: Walter Mirisch: From Bomba to Body Snatchers (14mins) An overview of Walter Mirisch with historian and author C. Courtney Joyner. Joyner is engaging and as always, well researched.
Interstellar Travelogues: Cinemas First Space Race (10mins) An audio interview with sci-fi artist Vincent Di Fate on the use of space travel in books and films from the '20s throughout the 40s and of course the '50s. This is well produced and a nice simplistic overview for those new to the genre. Though hardcore fans won't gleam anything new from this featurette. Its still enjoyable nonetheless.
Also included is a nice booklet with the essay Mars at the Movies by Don Stradley.
Strangely the interview with Cameron Mitchell (included on the DVD version) was unable to be ported over to this release.
Final Thoughts: As some of you may know I don't typically do final thoughts on re-releases that are under 30.00 but I do sometimes when I think its worth it. The Film Detective is a label that doesn't put out as many releases a year as the other labels but wow, when they do, they do it right! Every FD release that I've reviewed has been well-restored and featured great extras. For fans of obscure genre outing will certainly want to add this to their collection and to support a label willing to invest in them.
Posted by The Video Attic at 12:15 PM