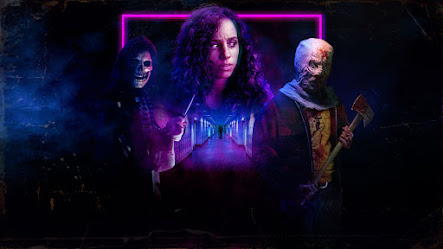 A group of teenage friends must fight to stay alive when a rash of murderers takes place in their sleepy town of Shady Side. It turns out that evil things have been happening for 300 hundred years thanks to a witch’s curse.

I was the perfect age when R.L Stine penned the spook-tastic Goosebumps, a series that has been formative for an entire generation of budding horror fans. Outside of Goosebumps, Stine also had the Fear Street series which was aimed a little older but still considered YA (young adult).  In 2015 fans got a fairly fun but not stellar big-budget adaptation to Goosebumps and a fun but ultimately so-so sequel in 2018.  So, when I heard that Stine was teaming up with Netflix to bring an R-rated trilogy of films, I was pretty excited. As if to bait me further, the first part is set in 1994, a time I recall very well (being nine at the time).  Fear Street: 1994 has maybe one of the best cold openings in recent memory. It features a neon-dripped mall sequence that is as tense as it is well directed coupled with nicely timed scares.  Though the movie never hits the creative high as the opener, the movie is a great throwback nonetheless. The more cynical critics might say that it’s just a mixture of Scream (1996), It: Chapter One (2017), and a good dose of Stranger Things (2016-). While that is not entirely wrong, I think that Leigh Janiak finds a way of putting all these influences in a blender and the end product is something that feels fresh.  I also think that the filmmakers do a lot of interesting worldbuilding on what is a pretty stock mish-mash of horror tropes. It is also refreshing to see some positive LGBTQIA representation in the form of a lesbian couple at the center. Having said that, it does have a pretty cringe-worthy trans-coded character named Beddie (Eddie with a B written over their name tag) which is extremely tone-deaf, especially in 2021.

I have to say that I was skeptical as book-to-film cash grabs banking on the nostalgia feels is hit or miss. For every outstanding piece of media like It: Chapter One you have lazy, slap-dash films like Scary Stories to Tell in the Dark (2019). Fear Street does the seemingly impossible in that it wears its influences squarely on its blood-soaked sleeve, yet it has a well thought out and written script that allows for a lot of great action-set-pieces, scares and most importantly the right mix of cheese and sincerity with some great messages. Sure, it’s not totally original, but it’s spooky atmosphere and killer ‘90’s soundtrack make for a fun outing.

In Fear Street Part 2 picks up right after the events of 1994 Josh (Benjamin Flores Jr) and Deena (Kiana Madeira) bring a possessed Sam (Olivia Scott Welch) to the one woman they discovered match wits with the witch and live to tell about it. Living alone and in fear, the woman recounts the harrowing ordeal. We then flashback to the summer ’78. The location: Camp Nighthawk. What should be a week of care-free fun and pranks ends in a bloodbath as the curse of Shady Side continues in this second installment.

Netflix released the second part in their trilogy of films with Fear Street Part 2: 1978. My hopes going into this were high because I thought the first part was, for all of its flaws, a lotta fun. Well, I can breathe a sigh of relief as the second is a worthy entry in this spooky-enjoyable trilogy. In fact, I think it might be slightly better. What’s interesting is that ’78 doesn’t go right into the titular time period but rather picks up right after we left off in the previous film. Therefore, the ’78 time period feels organically woven into the plot but we also don’t drop the characters that we the audience spent time getting invested in.  Also, like any good follow up this outing doesn’t feel like a retread but rather expands the mythos. The end result is what feels like another piece in an expertly mapped out puzzle. Fear Street Part Two rewards those who pay close attention with clever call backs and foreshadowing.

It’s no coincidence that both John Carpenter’s seminal slasher Halloween (1978) and the Nighthawk massacre take place in ’78, and this is just one of many easter eggs, references and name checks to other slasher and horror media littered in Fear Street Part 2.  Much like ’94, ’78 proudly wears its influences on its gore-stained axe, yet its clever and complex worldbuilding saves it from feeling tiresome or cheap. While the movie does have enough splatter to satisfy the most diehard gore-hound you can tell that this is secondary to a fully formed narrative with fleshed out characters. Fear Street strikes a tricky balance catering to the more excessive traits of the horror genre whilst not sacrificing story. Leigh Janiak does a great job at directing and I cannot stress the kind of pin-point attention to detail that has gone into shaping this outing. It helps that we get some top-notch production design by Scott Kuzio (The Innkeeper). The fresh-faced cast is also great with standouts like Sadie Sink (Stranger Things), Emily Rudd, Ryan Simpkins all adding something special but everyone is on the same page.

Fear Street Part Two: 1978 not only is a worthy follow up but it plays with the slasher genre in a way that feels fresh and fun.