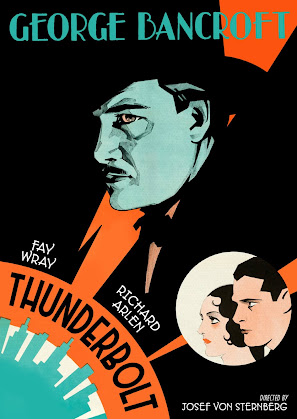 An early film from Josef von Sternberg best known for his films with Marlene Dietrich Thunderbolt tells the story of the titular Thunderbolt Jim Lang (George Bancroft) who frames a man named Bob (Richard Arlen) after he steals his girlfriend Ritzie played by screen icon Fay Wray best known for being the beauty that killed the best in King Kong (1933). Hijinks and romance abound in this pre-code gangster film.
If I'm being totally real Thunderbolt is a movie that one must suspend a lot of belief in a plot that is solid but not altogether well thought out. There are some pretty big gaps in logic and some elements that are not explained -but really should be. Not to mention the acting is a little all over-the-place with some under acting from some and over from others. George Bancroft best remembered for films like Stagecoach (1939) and Angels with Dirty Faces (1938) gives a performance that is actually more on par with what modern audiences are use to (not over acting like in silent/early talkies) and is a smooth talking guy with charisma and menace. It actually earned him his one and only Oscar nomination which he lost Warner Baxter for In Old Arizona (1930). Fay Wray is of course talented, lovely and seems to light up the screen every time she is on it.
As much as I give this movie some guff I will say that its a fairly breezy enjoyable watch if you, again, dont mind some plot holes. It also is interesting as it has some elements that would crop-up in other gangster films as well as accidentally being a proto-film noir which would emerge from the late thirties and explode in popular in post WWII America. Not the best Sternberg film however I did find it a mindless, fun watch. Also, I will watch anything starring Fay Wray.
Picture: Thunderbolt which is nearly one-hundred years old gets a face-lift on 1080p. The transfer has some scratches and artifacts but you cannot deny that for its age it looks brighter with solid clarity. I also noticed that the image flickering looked well controlled (a issue with older movies, especially those from the '10's and '20s) and the contrast of black-and-white is nicely balanced.
Sound: Thunderbolt has a DTS 2.0 track. I was pleased to say that there wasn't a lot of background hiss or noise which can be troublesome in silent and early talkies. This allows the dialogue and sound design come through nicely.
Extras: Thunderbolt has a commentary track by film critic Nick Pinkerton. Pinkerton delivers a engaging enough track that is well researched and, I must say actually made me appreciate this movie more upon second viewing. Rounding out the features is a trailer for Thunderbolt (and other similar films).
Posted by The Video Attic at 10:14 AM