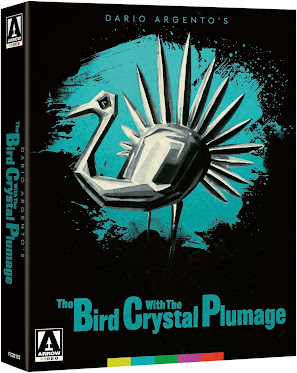 Before Suspiria (1977), even before Deep Red (1975), Italian master filmmaker Dario Argento came out of the gate with the brilliant and tense film that would lay the groundwork for his future work. And, I honestly think its my favorite from his Giallo period. Sadly, I missed out on the Arrow's Blu Ray but thankfully a UHD release was announced in March of this year. I was overwhelmed with excitement and, also happy that a new crop of fans would get to re-discover this movie and, also looking its best. An American author named Sam (Tony Musante) who is in a rut in his career and, took a job in Italy about rare birds to pay for his flight home to the US. He finds himself trapped behind glass and forced to witness a woman being stabbed. The woman, who is the wife of an art galley is fine but, we learn that other women have been brutally killed. Now, Sam must stay in Italy and help solve the murder mystery before he's next.
I seen this movie probably in my early twenties. After discovering Suspiria and having that blow my entire world apart, I was seeking out anything and everything Argento. And, whilst I love films like Deep Red and Tenebre (1982), I have to say I think Bird is my favorite from his early Giallo period. Partly I think because I saw Bird first but also, I think that its a staggering film debut that, as I said in my summary, laid the blue print for what basically his entire career. For example the film's themes, motifs and character types are all something the director would play with throughout the '70s and well into the 00's. Argentos masterfully injects a lot of twists and turns with a kind of confidence that is awe-inspiring for a first time director. You can that that if he had any kind of self-doubt he put it in check and none of it shows on screen. Dario has us the audience in his grip and you know your at the mercy of this then young brilliant filmmaker. This is also probably one of the few movies that I think is genuinely tense in a classic Hitchcock kind of way. In fact, this movie cribs a lot from Hitchcock but doesn't feel like outright thief.
Fans of the ultra splatter of Argento might be disappointed as this movie isn't as graphic as his later works. I actually am OK with that because the director makes you imagine what you don't see which is often far more unnerving. There is also something almost fetishistic about the murders which, of course would be a staple of his later films.
The Bird with the Crystal Plumage, in my opinion ranks right up there with Dario's best work. Its sleek, strangely erotic, and have a compelling and tense narrative. A must-watch.
Picture: The films of Dario Argento are without a doubt the most visually stunning and, its great that we are getting a lot of his films in UHD. I had seen this movie many times on DVD and later Blu Ray. So, I can say that, without a doubt this is the best this film has ever looked in my opinion. Right away I noticed up uptick in color and clarity. Details in locales, sets, clothing and even the texture on clothes really pop. Grain is present but smoothed but, not overly processed. This helps the movie retain its film-like quality. Artifacts and scratches have been cleaned, leaving a pristine looking film. Skin tones have a nice warm and nature look.
Sound:  Bird has a Dolby Atoms track and is really stellar! The sound in my opinion offers a complex and 3D experience. The previous HD release felt more front heavy channel wise but, here it felt like it took advantage of a wider range on my sound system. A robust and in my opinion fantastic sound presentation.
Extras: Arrow, as always has stacked this release with some great extras. Included is: A commentary by historian and author Troy Howarth which was ported over from the 2017 Blu Ray edition. Howarth who authored the book Murder by Design: The Unsane Cinema of Dario Argento (which is fantastic and you should check it out!). Howarth brings a scholarly, engaging and totally engrossing track that is, in my opinion a must-listen to.
Black Gloves and Screaming Mimi's (30mins) A Video Essay by Kat Ellinger. Kat Ellinger should be widely known to genre fans as she provides many commentaries and essays not only for Arrow but Kino and other great labels. Ellinger as always brings an incredible wealth of knowledge and insight
The Power of Perception (20mins) Alexandra Heller-Nicholas takes a deep dive into the themes of perception and the role art plays in Argentos work.
Crystal Nightmare (31mins) Filmed in 2017 this interview with Dario Argentos is a engaging and interesting insight from the director himself.
An Argento Icon (22mins) Interview with actor Gildo Di Marco
Eva is Speaking (11mins) an archival interview with Eva Renzi (recorded in 2005).
Rounding out the features is Trailers (Italian, International, 2017 Frightmare) and Image Gallery.
Posted by The Video Attic at 8:00 AM