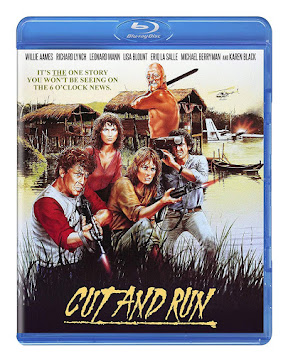 Check out my Reviews for Prime Cut HERE

Check out my Review for Strike Commando HERE

Please Note: I will be reviewing the Unrated Edition included on this disc.

Director Ruggero Deodato is probably most infamous for directing what is perhaps the most banned film ever made, Cannibal Holocaust (1980). Ruggero returned to the jungle for 1985's Cut and Run. A reporter is caught between a dangerous drug cartel and a tribe of cannibals in this mid '80s action film. Also things loosely connect with the then timely Johnstown massacre.

You pretty much know what your going to get from director Ruggero Deodato. Splatter, lots of nudity and a huge heaping helping of Grindhouse sleaze.  In this regard Cut and Run achieves exactly what it sets out. The movie is a nearly non-stop roller coaster of spectacular gore and breathless action set-pieces. I would be remiss if I didn't take a moment to talk about the excellent practical special effect. Guts, head de-caps, and tons of grizzly blood and gore coat what feels like a good 80% of the movie and honestly, I was totally on board for it. In fact, I would be inclined to say that Cut and Run is a shrine to grisly '80s gore-soaked excess more than any Friday the 13th film of the era.

And of course, it wouldn't be an Italian action/gore film with tons of sleaze and sex. The movie is of course not without its issues and cringe-worthy moments. Its a Deodato movie after all. There is something deeply off-putting though about the use of the Johnstown tragedy woven hap-hazardly into the plot. It feels like a cheap way to cash in on real life death not to mention it makes the film feel incredibly dated. I wish they would have maybe made up a cult instead of actually name-checking Jim Jones. Also, as fun as the overall film is it has its share of silly plot holes, hilarious dialogue and over-the-top or just plain wooden.

All of this aside I still thought the movie has enough going for it to gloss over this. The pacing is pretty solid and though I just got done complaining about some of the acting 'choices' this movie actually features a stellar cast. Notably, Michael Berryman most remembered for roles in things like Wes Craven's The Hills Have Eyes (1977) and more recently Rob Zombie's The Devil's Rejects (2005). Berryman is truly a force-of-nature in this film and it was damn enjoyable seeing him just totally go berserk in the wilderness. Also features a delightfully hammy role for Richard Lynch and a small but great performance from the legendary Karen Black.  Not to mention this movie features a score by Claudio Simonetti from Goblin fame.

Cut and Run never lets a pesky thing like story get in the way of telling a gore-soaked thrill ride that is oh so satisfying to watch. Low brow jungle massacre fun that is a great to turn off your brain.

Picture: Boosting a 2k scan Cut and Run is actually pretty damn good looking. Colors really pop and skin tones have a nice warmth quality to them. There is also an overall nice depth in picture sharpness and details like locales, costumes and sets stick out. I will say that the inserted extra footage (which was warned at the start of the film) is dodgy but totally forgivable.

Sound: Like the picture the sound presentation is for the most part excellent with a DTS 2.0 track.  Dialogue, score and sound design comes through nicely. Action scenes, in my opinion have some fairly good depth of field, especially for a 2.0 track.