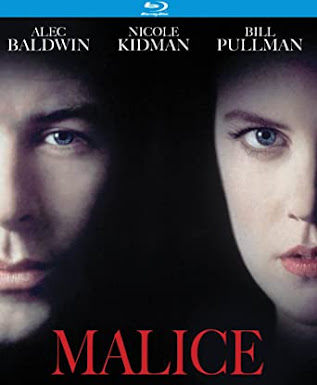 Aaron Sorkin followed up his screenplay for A Few Good Man (1992) which was based on his play of the same with 1993's Malice a thriller directed by Harold Becker (Sea of Love, The Onion Field).  The film made on a big for the time budget of 20 million and even with lukewarm reviews the movie made double over double its budget. The film tells the story of a mild mannered teacher named Andy (Bill Pullman) and his wife Tracy (Nicole Kidman) lives are turned upside down when they meet a hot-shot doctor named Jed (Alec Baldwin).

So...From the outside Aaron Sorkin is either someone who like or not. His rapid fire dialogue is sometimes pretty hammy and probably a bit pretentious at times.  Some people enjoy it, I on the other hand can do without it. Having said that I will say that Malice is pure '90s cheese-baked Sorkin but its also a fairly enjoyable neo-noir.  The movie is filled with plenty of twists and enough red-herrings to fill an entire warehouse. It's just the right amount of earnest and over-the-top performances and dialogue that makes this squarely into the camp-realm. But, if you can over look some plot holes it actually is a fun little roller coaster. This movie is delightfully bonkers as well and has a lot of moments that feel more like dream-logic than something that might resemble real life.  You can certainly tell that Sorkin was still finding his style but his trademark bombastic dialogue is still ever present. Characters tend to be a bit flat but the movie is more about mood and its ever twisting plot.

I have a soft-spot for '90s thrillers which spilled over from the late '80s with hits like  Fatal Attraction (1987). But strangely, despite the high profile writer and actors this wasn't even on my radar.  While its not nearly as brilliant as it wants you to think it is, Malice is a spicy modern-noir that dances wonderfully into that so-bad-its-enjoyable category. It features a deliciously delirious performance from Anne Bancroft and of course a supporting cast with the likes of George C. Scott, Peter Gallagher and Tobin Bell (yes, Jigsaw himself) and a very early one-scene one for Gwyneth Paltrow. If you, like me slept on this one-DONT-give it a watch.

Picture: Malice is a really good looking 1080p especially being six-years old at this point. The overall picture has a nice clarity and darkly lit scenes have been given a real polish. Skin tones have a nice crisp and natural and locales, sets and costumes have a nice amount of definition to them. The movie also retains a atmospheric noir-ish look fitting with the films thriller status. The movie does have some artifacts but very minor.

Sound: Malice has a DTS 2.0 track. Dialogue comes through nicely with no drop out issues presents.