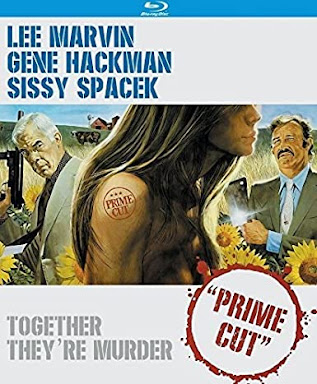 1972's Prime Cut is a movie that floored me when I first saw it and now, I am over joyed to finally see it in HD thanks to Kino Studio Classics.
The opening scene is a slaughter house of calm breezy music helps in my opinion firmly establish the films off-beat tone. Director Michael Ritchie had quite the interesting resume with films that ranged from Student Bodies (1918) (uncredited) to hits like The Bad News Bears (1976), Fletch (1985) and even a screenwriting credit on Cool Runnings (1993). Prime Cut tells the story of a mob enforcer Nick Devlin (Lee Marvin) who is sent to Chicago to collect from a man named Mary Ann (Gene Hackman). And, as you might imagine it doesn't go as planned in this sardonic and strange thriller.
As I mentioned above Prime Cut was a movie that I had discovered maybe ten-years ago thanks it being reviewed on a film podcast I was a big fan of. I was fairly familiar with Ritchie's work and, I knew I was in for something a bit on the wild side. And, oh brother I was not wrong. Prime takes a fairly cut-and-dry neo-noir thriller and a adds some downright absurd if not even surreal imaginary and set-pieces. It also doesn't skimp on the '70s sleaze and this movie would every bit be at home with The Texas Chainsaw Massacre (1974). The film is famous for having Hollywood icon Lee Marvin teamed up with the up and newcomers like Gene Hackman and Sissy Spacek four years before he own iconic role in the titular role Carrie (1976).
What else can be said about Lee Marvin? He was the ultimate rough-tough screen persona and he adds polish to this off-kilter film. Hackman meanwhile relishes in playing a country-dipped criminal and the scenes with he and Marvin are worth the price of admission alone. Spacek is good though I think she tends to get lost with big personalities like Hackman and Marvin. This isn't bad though as her character is suppose to be on the meek side.
Not only is this well directed but I also have to give Ritchie big props for crafting some great and highly effective action-scenes. A wheat thrasher chase scene is something right out of Hitchcock's North by Northwest (1959) but with a fun twist. Seriously, this movie doesn't get the love and attention it deserves and, even with it being widely available it still seems to languish as a obscure cult-classic with some very well known actors.
Prime Cut is deep-fried noir with a fantastic cast and a wonderfully weird sensibility.
Picture: Released in 2015 Prime Cut looks good but isn't flawless. Grain is a bit on heavy side and the consistency is uneven. The good news is the film certainly has a uptick in both clarity and colors in my opinion do pop nicely. Hopefully we will get a 2k or 4k re-release but, until that time this is a very solid presentation.
Sound: Like the picture the sound design is very good but also could use improvement. Dialogue is for the most point strong yet not perfect and not as clear as it could be. Overall, serviceable not horrible but not perfect.
Extras: Trailer
Posted by The Video Attic at 7:27 AM