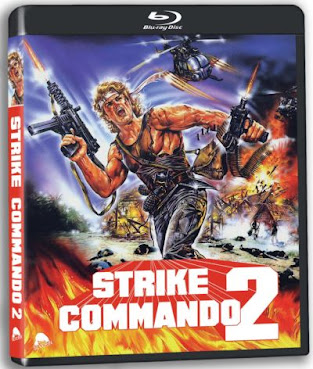 1986s Strike Commando was, for all its flaws was very successful and, wanting to ride the wave a follow-up film was put into production.  Squad leader Vic Jenkins (Richard Harris) is captured by terrorists demanding ten-million dollars in diamonds. Enter Michael Ransom now played by Brent Huff. Jenkins it turns out saved Ransom's life and now Michael must rescue Vic in this shlocky sequel to 1986's Strike Commando. I pretty much knew what to expect having seen plenty of Bruno Mattei movie's and, also having just watched the first Strike Commando. I have to say that, while the movie is still pretty bad in a lot of ways (more on that in a bit) I think that this a lot more charming and enjoyable. This time around we not only have actor Brent Huff replacing Reb Brown but tonally this movie does a complete 180.  The heavy, ultra serious stuff is replaced with more of a Romancing the Stone lightheartedness. You still have some overly dramatic moments but overall, Mattei goes for a more cartoonish version of the first film.

Some people may not like this whip lase shift from a serious drama in the first to a more action-adventure. I actually think this allows the movie to be in on its own joke and therefore, the bad and over-the-top acting feels more like it fits the wackiness. Of course, like the first film Mattei brings the fire power and, of course fills the movie with a lot of excellent action-set-pieces. So...As much as I enjoy this movie you cant escape the at times dreadful acting and a plot that is stitched together from other better films. Still, it has a charm that is undeniable and honestly, for all its rough edges I found it engaging and breezy enough for some mindless fun. As I said the acting is fairly all over the place but I still think the performances do the best with what they are given. Brent Huff is fun as a off-brand Indiana Jones and, it seems like he's having fun camping it up. Clearly, the actor knew what kind of movie they were making. Hollywood veteran Richard Harris who was twice nominated for Oscars is probably the most shocking bit of casting. Harris, like Huff knows what movie their making but the legendary actor gives it his all. Swedish born Mary Stavin gives a...shall we say interesting performance but, I still think she's charming and does her best. I also give her some slack seeing how English is not her first lesson.

Strike Commando 2 mashes together Rambo and Indiana Jones and in what feels like a insane live-action cartoon. A Must-Watch!

Picture: Like the previous Strike Commando, I was really impressed by Severin's transfer for the sequel. Colors are well balanced with outdoor scenes really looking quite stunning. For the most part artifacts and scratches have been cleaned and grain is present but well distributed throughout. Skin tones have a natural look and thankfully nothing looks overly processed.

Sound: Strike Commando 2 features a DTS 2.0 track. Sound design comes through nicely as does dialogue. No unwanted background noise or drop out issues.

Extras: Extras for Commando 2 include:

Michael Ransom Strikes Back: (14mins) A Brand-new interview with actor Brent Huff. This is highly entertaining interview and Huff is engaging and charming. A lot of great stories.