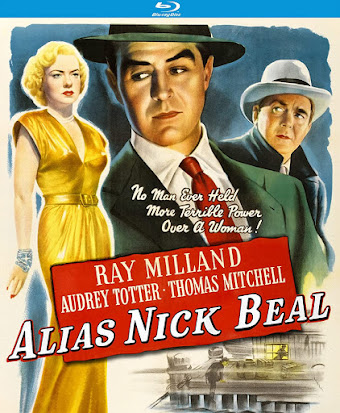 Joseph Foster (Thomas Mitchell) is a squeaky clean D.A but finds he can't enact real change because of the corruption and under handed deals. On a ideal whim Foster says he would sell his soul for an even playing ground, Enter Nick Beal (Ray Milland). Now, Foster might just get what he wants but its going to be at a stiff cost as Beal is not who he seems to be in this whimsical satire.

John Farrow takes the world of politics and film noir but, interesting fuses a Faust like twist. It feels like a slightly twisted Mr. Smith Goes to Washington (1939) with an added supernatural spin. Farrow does a fine job directing a movie that becomes more and more engaging as the plot unfolds. Though not heavy on plot Farrow and screenwriter Jonathan Latimer (who also wrote the Milland noir The Big Clock and also directed by Farrow) craft a tight and highly efficient film. The entire film feels like it works as a updated fairy-tale with it wearing its morality play status proudly on its well tailored sleeve. It's also a really stylish one. Drenched in fog and low-key lighting Oscar winning cinemagrapher Lionel Lindon (Around the World in 80 Days) gives Beal a nicely atmospheric flare.

Ray Milland was known for this dry sardonic wit and therefore I think he makes a great Nick Beal. As with a lot of Milland's acting he delivers everything with just the right amount of understatement and zeal. Wisely, the actor never goes full ham on the role but does give it a wickedly fun spin. He's really fantastic. Like Milland, Thomas Mitchell never under or over acts but finds a good middle ground. Mitchell sells this humble, loveable and seemingly unblemished DA. The only other better actor would have been maybe James Stewart.  Also features great performances by Audrey Totter, Geraldine Wall, Fred Clark etc.

Alias Nick Beal might feel sappy or maybe overly optimistic (which it is) to modern viewers. However, given the current climate I think there are lessons we can still gleam from it. The film still packs a punch and is extremely well made.

Picture: Alias Nick Beal is presented in its 1:37:1 and its overall really good on 1080p. Lets get this out of the way, Beal isn't flawless and has some slight  artifacts and flicker in the print. I still think that the movie is an upgrade over previous editions and has a nice uptick in clarity and sharpness. Grain is even really well handled. Details in the set and costumes also really stick out.

Sound: Beal has a DTS 2.0 track. Dialogue comes through nicely as does the sound design as well as the excellent score by Franz Waxman (Bride of Frankenstein).

Extras: Beal has a devilishly good commentary track by noir expert Eddie Muller. Muller states that he came out of retirement commentary track wise and, we the fans are all the better for it. Those who enjoy Eddie's  Noir Alley will know that he is well researched and entertaining. I also loved how he personal connects with some the stars of the movie. It makes for a rich and interesting track. Rounding out the features is a trailer for this and similar movies.