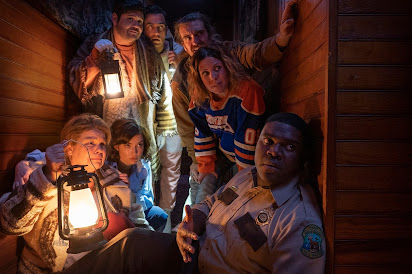 It’s so amazing when you can see a talented director mature and evolve, especially over a short period of time. Such is the case with writer, director Josh Ruben. His previous film Scare Me released in 2020 was a creative, minimal horror comedy that I instantly fell in love with. So, you can imagine my excitement when Ruben was already making a follow up film based on the Ubisoft game Werewolves Within. The best way to describe Werewolves Within is like inviting a bloody-fur-clad Agatha Christie to a real-life game of Clue only the house is full of gun-toting lunatics. What I love about both of Josh’s films is that he totally understands the tricky balance of horror and comedy. Nice guy Finn (Sam Richardson) just started his post in the tiny snow-covered town as a ranger. Meanwhile, a planned pipeline has the sleepy hamlet divided. A motley crew of towns folks must fight to stay alive when they are trapped with a killer amongst them.

The movie finds a tone that is savagely sardonic and its themes and motifs are expertly woven throughout. The comedy largely lands with some moments of brilliant vaudeville-like rhythm. Also, I love how this movie is smartly written, but Josh isn’t afraid to be broader in terms of the humor. After all, as high-brow as people like to think they are, a motivational speaker shouting, “Balls!” will always be funny. I also love how the painfully mundane is brilliantly turned on its head to hilarious results.   Ruben has a way of making his films feel grounded in reality; yet, everything is dripping in a slightly surreal ooze. This is something director Quentin Dupieux does to a lesser degree.

This is certainly what I would call an ensemble and, wow, what a fantastic one. Sam Richardson (Veep) is tasked with being the moral and emotional center as well as viewpoint character, and he delivers. Richardson’s Finn is instantly likeable and relatable, even painfully so. If there is any justice, this will be the breakout role that will make Richardson a household name. Milana Vayntrub (This is Us) shines in the role of Cecily and similar to Richardson brings something wholly special and dazzling to the screen. Also, talk about a dream supporting cast including: Michaela Watkins, Michael Chernus, Sara Burns, George Basil, Harvey Guillén, Cheyenne Jackson, Rebecca Henderson and Glenn Fleshler. There is not a single weak performance to be found. Even when some actors go a bit broader in their performance it still fits well within the strange world Josh has crafted.

Interestingly, Werewolves deconstructs manhood and, more specifically expectations that men are suppose to uphold. Like Scare Me, I love how Josh can make an entertaining movie first but also have something deeper to say. I also liked that we had gay characters with some agency. Capturing the stark haunting beauty of an isolated snow-covered small town, cinematographer Matt Wise brings a palpable mood that helps further enhance the production. It’s also worth giving a lot of credit to production designer Bret August Tanzer for crafting a rich and detailed world that feels lived in and real. Fur and laughs fly fast in this smartly written and highly engaging mystery that feels like the perfect love child of The Thing, The Wolf of Snow Hollow and Clue.