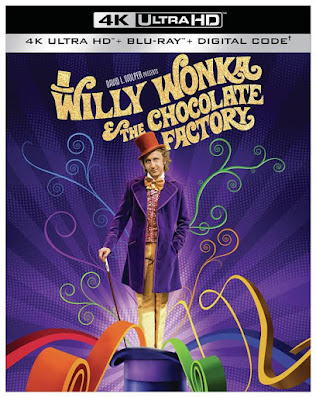 1971's Willy Wonka & The Chocolate Factory is one of those films that is just as magical today as it was one I was a kid. And, frankly very few movies can boost that claim. It feels like every single ingredient from Mel Stuart's pin-point direction, the brilliant casting of the legendary Gene Wilder as the titular Wonka the music and the art/production design that still fills me with childlike wonder and excitement. Though critics at the time generally loved it, shockingly the movie was not a big hit, only making 4.5 million dollars on a 3 million dollar budget. It was even snubbed at the Oscars only being nominated for Best-Music.

Thankfully, the film saw a big boom in popularity on the home video market and now, is considered a classic. In 2014 the film was added to the US National Registry by the Library of Congress. Everybody knows the basic plot but, Willy Wonka tells the story of a poor boy named  Charlie Bucket (Peter Ostrum). Nothing seemingly exciting happens to the lad until a contest is held to tour the mysterious Willy Wonka's factory. A golden ticket is hidden in select bars of chocolate. It just so happens that Charlie finds a ticket and is whisked off to the factory tour. Pure imagination awaits.

It blows my mind that a movie as special as Wonka was not a huge hit at the time despite being praised by some of the biggest critics at the time. It's far from a perfect film and, I think overcomes despite a somewhat shaggy second act and some interesting tonal shifts. But, Mel Stuart manages not only seemingly distills childlike wonder but, also injects some sharp sardonic wit for the adults. I also like how the movie wasn't afraid to be a bit darker, keeping more in line from author Roald Dahl's original book. The boat ride remains one of the craziest things even put into a children's movie. It remains a favorite of mine and is something that still holds but all these years later.

Picture: I am happy to report that this is by far the best Willy Wonka has ever looked on home video! Notoriously fans were unhappy with the previous Blu Ray with misframing. Thankfully, this has been re-framed closer to the original aspect ratio. The previous Blu Ray also felt over-processed and, again, this seems to have been fixed. What we have now is a more film-like feel with grainy texture. The grain is not chunky and is smoothed out nicely. Clarity is overall outstanding with a nice sharp definition in things like sets, locales and costumes. Colors pop and are vivid but, again don't have an overly worked look like the previous edition.  If you are wondering if this is worth an upgrade over the Blu Ray I feel I can safely say in my humble opinion that yes, this is certainly worth buying. The team at WB seems to have taken the feedback from the previous edition to heart and what we get in the end is a better overall looking film.

Sound: Willy Wonka has a DTS 5.1 track. Many might be upset over the lack of a original mono track or a Atmos track but, I have to say I think this track is incredibly solid. Wonka's 5.1 track is in my opinion provides a nice 3D sound presentation throughout. Overall, this feels like the same track carried over from the Blu Ray. Not mind blowing but I think it certainly is robust enough to do the trick.

Extras: Warner Bros. ported over the previous extra features which includes: Commentary with the Wonka Kids, Documentary: Pure Imagination: The Story of Willy Wonka and the Chocolate Factory, 4-Sing Along Songs, Vintage Featurette and trailer.