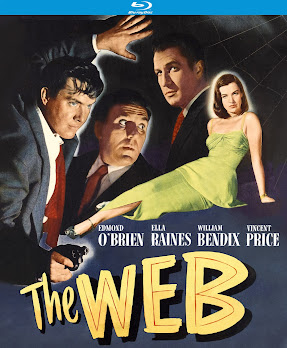 I've been on a film noir kick lately so, I was excited when Kino had released The Web (1947) made by Universal Studios You notice I say release and not re-release because Web never had a Laserdisc, VHS or DVD release officially in the US. And, it co-stars the legendary Vincent Price. Michael Gordon who is probably best remembered for the rom-com Pillow Talk (1959) directs this slick noir. Bob Regan (Edward O'Brien) is a lawyer who turns body guard for the wealthy Andrew Colby (Vincent Price). One day Bob kills a man defending Colby but, it turns out this was a set up. Gordon made three film noirs and this is an incredibly underrated one. Writers William Bowers (screenwriter and had a role in The Godfather Part II) and Bertram Millhauser pens a screenplay that is makes for a quite engaging experience and I was fully invested in mystery presented. Couple this with Gordon's nice attention to detail and you have a very enjoyable noir-thriller.
Oscar winner Edward O'Brien (The Man Who Shot Liberty Valance) really brings a polish to this modest budget b-picture programmer. He really is treating the material with respect and brings a lot of charm and pathos to the role. With his signature look and voice Vincent Price is devilishly good in what could easily been a thankless role. William Bendix has a small but memorable role as a police officer prodding Regan.  And, of course Ella Raines known for other noirs like Impact (1949) and Phantom Lady (1944) is able to hold her own against her male counterparts. She is fantastic.
The Web is a wickedly good, engaging noir-thriller with a stellar cast.
Picture: The Web is another impressive 1080p release. I could swear this is a 2k scan though it doesn't appear to be. The black-and-white contrast is nicely handled and the overall picture has a clean sharp clarity. Grain is present but I don't think that its heavy enough to be distracting. There are some scratches and artifacts present but again, nothing that detracts from the overall product.
Sound: The Web has a DTS 2.0 track. Dialogue comes through nicely as does sound design and score. No unwanted background noise or audio drop outs. A very healthy overall sound presentation.
Extras: Extras for The Web include a commentary by Professor and Film Scholar Jason A. Ney. Ney's commentary is well researched and engaging throughout.
Posted by The Video Attic at 11:05 AM