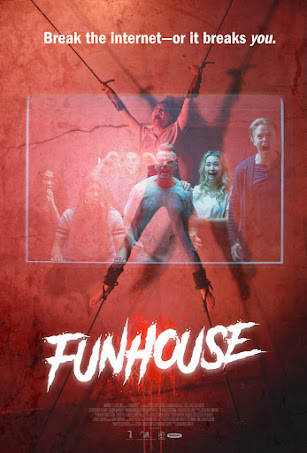 Disclaimer: Magnolia Pictures sent me a free digital screener. The opinions contained within reflects my own honest thoughts on the content.

A motley crew of washed up, fame seeking people sign up for a reality game-show with a whooping five-million dollar prize. Everyone is promised a 100k payday just for signing up. Funhouse had the making to be a damn good and really interesting film but, sadly is a mixed bag at best. The film starts with a brutal killing all whilst Beethoven plays in the background. This for me set the films tone of slightly-tongue-in-cheek but has lofty ideals that don't quite land. I will say that I am always down for a movie that lampoons Internet and Influencer culture but outside of Cam (2018) all attempts have fallen short. I will say that I give writer director Jason William Lee credit in that he does attempt to take the time to develop characters. He also takes a stab at a thought-provoking bit of satire. This is further highlighted by a YouTube-esque commentator called Pete Sake. It put me in mind of Roger Corman's seminal satire on media over-saturation Death Race 2000 (1975).

Here's the thing though: Funhouse aims for lofty ambition but face plants. The biggest thing is the movie struggles to find that sweet spot of serious social commentary and biting satire. It seems to tip more to the side of the earnest and, sadly,  as a result it comes off preachy. The main villainy spouts off eye-rolling anti-social media manifestos every chance he gets which literally just verbalizes the films core theme. This brings me to my second biggest issue, this movie is not in the least bit nuanced or subtle enough to be effective in what its trying to get a crossed. The closet thing we get to any thing like that is how the filmmakers give the characters (for the most part) complexity which suggests that Lee's take on Internet culture is not as black-and-white as it may seem. Sadly, this is never taken far enough to be really effective or interesting. The acting for the most part is solid but some accents are highly questionable. Still, it was fun to see the legendary filmmaker and actor Gigi Saul Guerrero in a role -but again they don't do much with her character which is such a shame. Not to mention I had to groan out loud at some lazy stereotyping that creeps up in this film.

I will say that even though the movie is not very original and mines a lot of things like Saw (2004) the central premise is engaging enough to make the movie a breezy watch- though it does get a bit repetitive in places. I won't spoil the ending but it literally makes no sense-like a tact on twist that was never hinted or cleverly placed. It felt cheap. This is frustrating because this is yet another case of the pieces of a really stellar movie is here, yet it fails to put it all together in a way that is groundbreaking and engrossing. Funhouse is a wonderland of half-baked ideas and missed opportunities. Its 'fun' and gory enough for a Friday night watch however but its nothing I would run right out and see again.