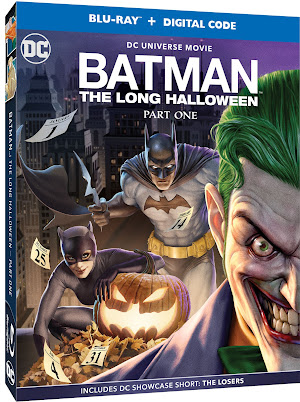 She's lent her voice of Samantha Maxis for Call of Duty: Black Ops Cold War, Chocolatte in World of Final Fantasy and, recently Gilda Dent in the long awaited Batman: The Long Halloween Part One. I got to virtually sit down with actor Julie Nathanson to talk about her role in this epic Batman tale. 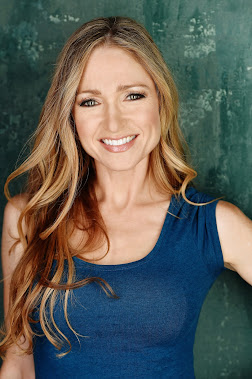 VA: Prior to coming onto this project had you read or were a fan of The Long Halloween?

JN: (Laughs) I had heard of it, especially since having spent a little time in the Batman universe. I had heard that The Long Halloween was a well loved story and I not read it. And, usually I'm the kind of person who likes to do all the research I possibly can before beginning a project and tackling a character, especially if there is anything existing beforehand. The script that I was going to be reading was the source material for me with Tim Sheridan having written the script which was adapted from the original. (Laughs) So, I forced myself not to read the graphic novel, I actually own it though (Flips pages) but I wouldn't read it until after we finished principal recording. I really wanted to make sure that Gilda stayed real for me and that her story from the script that was presented to me. I did do a little bit of poking around to see what might be there in the history for Gilda. But, for many of these characters there are a few iterations that it doesn't always seem like their taking the same track as the story that were in so I really just based on performance as Gilda on the script and the film that we were creating. Later on, I did enjoy reading The Long Halloween afterwards  I was just blown away but the love and respect that was paid to the original story.

VA: That's so interesting. I think Gilda has the strongest emotional core in the film.

JN: Yeah! I wouldn't disagree (laughs). And its a quiet emotional core. That's one of the things that really attracted me to the character, besides the fact that I'm not going to turn down an invitation to the DC Universe party. I love the idea of playing this character whose inner world keeps her in this guarded, sometimes even spacey place as she processes a lot of pain internally. And, she is a really fascinating character portraying her has been a real honor. 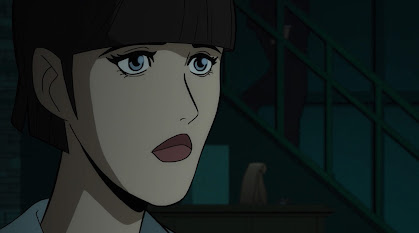 VA: What I love about how you play Gilda is you can feel her pain without screaming it out.

JN: Yes! Thank you for saying that. That's exactly how I felt and what I wanted my to get a crossed. And, also that was just part-and-parcel to Wes Gleason's direction and decisions and from the team at large. This kind of quiet internal struggle, its not usual for me. I have played a fun variety of characters and she is pretty unique for me. So, to be guided into taking her in this direction where she's just quietly, deeply emotional in so many layers. And, not to, as you said, shout it out, but, do it in such a way as to not be overwhelming or take up too much space. I always liked the idea of...I use this as an example: Who do you want to talk to at a party? Are you interested in the person who comes up to you and is jumping up and down dancing (laughs) and making a big commotion or are you perhaps interested in the person who just sort of quietly noodling on a violin in the corner. I feel like Gilda is the latter, you know. Like,  you see there's something deep and special going on there internally. 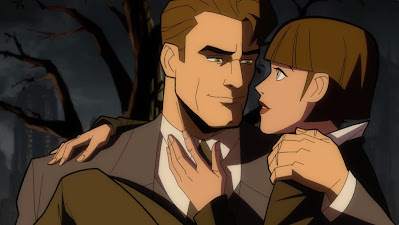 VA: That's such an great way to look at the character. I was curious if you got to record your lines with Josh Duhamel or you separately?

JN: Everything was separate. I'm always amazed by the magic of voice-over and he (Josh) and I have been doing this for quite some time now. I'm continually amazed by how these two characters that have been inhabited by actors that have never been in the same room can have chemistry like that.

So, no, we were never in the same room together. I love Josh's performance, he's a wonderful scene partner. I think our characters feel very real and natural. It feels very connected but, also disconnected when that's needed as well. One of the things I love about voice-over is how mandatory my imagination is in the process. Like, I have to really imagine how Harvey might sound like. And, my director Wes Gleason would sometimes feed a line to me and, he wasn't trying to act the line at me but I would try to play off of it and try to picture what Harvey would look like at the moment. All of those things come together even though Josh and I were never in the same room.

VA: Wow, thats interesting. I've always wondered if its common for voice-artists to record by themselves?

JN: (Laughs) It's really really common. A lot of animated series you'll record separately but some you might have a group together or a few people at once. I've voiced a lot of video games, the anomaly has been  being in the room with another performer for video games. I would say 99% of the time your in the booth alone. For animated features I feel like its mostly been recording alone. It's odd but once you get into the practice of ADR which is when we do another round of recording once the picture has come back. During this process were watching the moving picture itself and perhaps adding efforts that hadn't been there and the animators felt like there would be maybe a punch thrown here for example, or a reaction there, we fill in those blanks. Sometimes it`ll be just a tweak to a line or the performance to support where the animation took the emotion of the character. When that happens you can usually hear each other because the original performance is there. Thats when I got to hear our performance for Long Halloween and got to hear the connection between Harvey and Gilda, Josh and myself and I was really blown away. 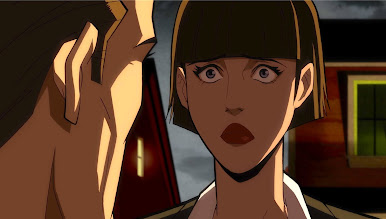 VA: It's a fantastic performance and, its even more impressive that you come off so natural together and you weren't even in the same room.

JN: Thank you, I really appreciate that more than you know. I just have to again mention our voice director Wes Gleason again because that goes to the voice-director's ability to shape our performances to make them fit together. That's really the artistry of it comes through.

VA: Indeed, so what can fans of your work expect to see, or rather hear from you in the future?

JN: Well, I'm in the most recent volume Love, Death and Robots and Eden which is an original anime series on Netflix, its a four episode series. I did some work with Neil Patrick Harris on the latter project. I have just voice Samantha Maxis in the Call of Duty franchise. I've been doing her voice for ten years now and its exciting because I've been doing this character as a child and now I get to voice her as an adult. That's been such a great journey.

A Big thank you to Julie Nathanson for taking the time to speak with me. My review for The Long Halloween Pt 1 Coming Soon.

Produced by Warner Bros. Animation and DC, the feature-length animated Batman: The Long Halloween, Part One will be distributed by Warner Bros. Home Entertainment on Digital and Blu-ray next Tuesday, June 22, 2021.