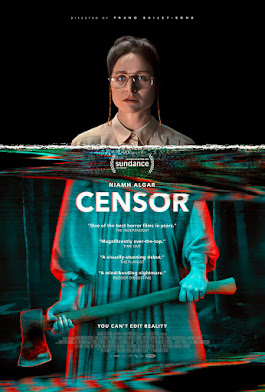 Plot: Film censor Enid takes pride in her meticulous work, guarding unsuspecting audiences from the deleterious effects of watching the gore-filled decapitations and eye-gougings she pores over. Her sense of duty to protect is amplified by guilt over her inability to recall details of the long-ago disappearance of her sister, recently declared dead in absentia. When Enid is assigned to review a disturbing film from the archive that echoes her hazy childhood memories, she begins to unravel how this eerie work might be tied to her past.

I got to sit down with the director of Censor Prano Bailey-Bond and Niamh Algar who plays Enid.

VA: My first question if for Niamh Algar. I was curious how the costume of Enid helped inform the character of Enid?

NA: Oh, thats a good question. A lot of it actually. I always felt like Enid almost had this kind of set uniform for work. Myself and Prano would talk about this idea that every night she (Enid) would iron her socks and have everything in place. It would almost be like a school uniform thats ready to go. And, everything has its place and there is this idea of control in her life. But, as the character begins to break down both physically and psychologically, so too does the costumes. You never really see this character unbuttoned and, I there's this moment where she is, even if its a slight bit of nudity, you really for her because she is so uncomfortable in that situation. So, yeah putting on that costume every morning I felt like I was just getting into that character. Even down to the shoes she wears is like a sound to it all, its all very clipped and proper.

VA: My next question is for Prano. Now, I read you got the chance to interview some real life censors from this period. How much of this input helped shape or inform the screenplay, if at all?

PB: I think it shaped and informed lots of things, I mean its defiantly a fiction film and there are things we did to really make sure that people were getting pulled into the historical fact and detail. We wanted to create a space where the audience can go with the character on this journey, but then in terms of the conversation with the film censors, there were things that really helpful creatively. For example, I remember speaking with one woman who said the environment she was working in was very pokey, you know, like the offices had no windows and your in the dark all through the day. Your watching what's essentially these soft-core films or really violent movies and she would leave work feeling a little bit seedy and those kind of descriptions were helpful creatively when thinking about space. I wanted the location for the censors office to be this kind of underground rabbit warren where you sort of hear the screams of other movies like coming down the corridor. But, also the fact that there's no windows makes it quite claustrophobic so its this space where Enid is just kind of locked in with these horror films. There's no fresh air basically. So, some of those things were really like backed up by these conversations I was having with film censors. But, also obviously just understanding the job of the film censor. Only a few people have actually done this job, its not like working at a supermarket (laughs) where lots of people have done it. As a filmmaker you want to as much as possible get the aspect right or get into the head of someone who has done that. Those conversations were really helpful in that respect.

VA: Okay great. Did you get to see any reference photos of these offices?

PB: The censors is a fiction but the equal to that is the BBFC and I went there doing the research period when I was writing the film. It was one of the first places that me and my co-writer visited. We went and chatted with some of the censors who worked there and we also got access to some of the files for the films from this period. We were able to to sit down and read through like the file on The Evil Dead for example, and all the comments from that time, which was incredible.

PB: Yeah, it was fascinating. And anybody over here (England) can do that by booking in times at the BBFC. So, that was some of the things we did. 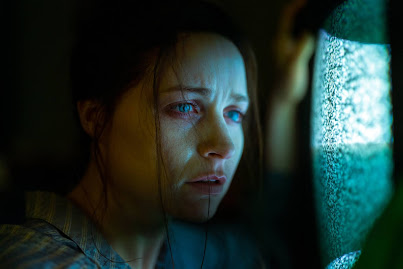 VA: So, Niamh, I heard you had to watch a bunch of video nasties to prep for this. What was that like?

NA: That was really interesting, some of it like Cannibal Holocaust was very disturbing for its use of actual killing of a turtle and that made me quite sick. A lot of them were....not badly done but quite funny. So, for me it was just an introduction and Prano made me a watch-list. Things like, Scare Jessica to Death or Texas Chainsaw Massacre. Or she would have me watch something tonally different like The Piano Teacher, We Need to Talk About Kevin, Black Swan was another one. Yeah, the education into the video nasty world was interesting.

VA: Prano, Censor has such a cool visual style. I was wondering if you intended to contrast the drab colors of the start of the film with the more neon and vivid scheme in the latter part of the film?

PB: Yeah, absolutely. It's funny because I think back to '80s Britain and you know the pictures of life.  And I mean like real life pictures, not this stereotype of big shoulder pads and perms but real life being quite bleak and gray, Thatcher's Britain. Over here you a depression and cuts to funding and stuff like that. And, its so interesting to think about that world juxtaposed to the lurid vibrant wild look of these video nasties. Like, some of the covers for these films are so colorful and like lurid you into them. So, for me it was like how do we get this character from what is kind of a bleak gray world into the kind of vibrant world of these films. The way we worked with color was very, I kind of imagined color being woven into the scenes. So, you have Enid in her censors world and she's dressed in the same colors as the office, its all kind of blue and gray. Then when we go into her dreams we start to introduce purple colors and then we come back to the censors office after dream we start to see pinks and purples in the background. It's all very subtle but its slowly shifting with Enid's psyche as she gets deeper into this video nasty world. Yeah, that was a fun thing to play with and defiantly on purpose. As a filmmaker I get very excited about playing with things like that.

VA: Prano, how much of the fake film "Don't Go in the Church" was shot and used in the final film?

PB: Actually what you see is all that we shot. Its funny because when me and my editor sat down to cut that we were like, "Oh, man I wish we could have shot the entire thing" (laughs). I would have been really really cool if we had time to have a feature length Fredrick North film.

VA: I have to wrap soon but I was wondering, and these question is for these or both, do you feel like Enid kind of represents a repressed Britain during this time period?

PB: That's really interesting. The film is very much about repression and (laughs) the British you known to be essentially closed, arent they? But, I think thats a really really fascinating interpretation which I'm going to think about more later on.