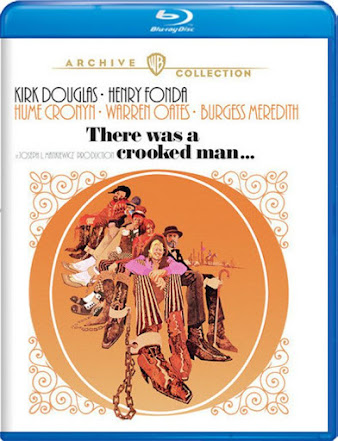 I have to say that There Was a Crooked Man...(1970) is the victim of poor marketing as it has a not very flattering cover art. In fact, if it had not been for Trailers from Hell featuring it I may not have given this movie a second glance. Though, I am (mostly) glad I did. The film set in the 1800's sees a charming robber named Paris Pitman (Kirk Douglas) who hid half-a-million dollars before being arrested. Him, along with a motley crew of crooks must dig up the loot and escape in this nutty comedy.

So....I have a lot of mixed feelings on Crooked Man a late entry for the legendary four-time Oscar winner Joseph L. Mankiewicz. I'm also really fascinated by these big budget ensemble casted films. especially ones that were made in post-counter-culture Hollywood. In a way Crooked Man feels both dated and progressive (for the time). Its Golden Age cast harkens back to the films of the '30s and '40s and the premise for the most part feels like it could have thrived in a earlier outing. However, it does feature a wonderful gay couple (Queer coded but overt) who for the most part (back to that later) are not the butt of the joke. In fact, they not only are not over-the-top stereotypes but, in my opinion the only truly noble and likable character outside of Fonda's character. In fact, it feels like they have the seemingly happiest outcome of everyone.

What can I say? This cast is pretty amazing. Kirk Douglas as always slips into the role of roguish charmer with incredible ease. The veteran actor was and should be remembered as one of the greatest actors of his generation. In a great piece of casting they got Henry Fonda, who was not only at the same level of Douglas but was quite at home in the western genre. Like Douglas, Fonda oozes charm and seeing the pair play off each other is really a treat. And, of course you have an amazing supporting cast including Warren Oats, Hume Cronyn, Burgess Meredith, Lee Grant Alan Hale Jr and John Randolph just to name a few.

Still the movie has some dated elements such has racial slurs (that didn't really need to be there) and though the gay couple are treated with respect, Douglas's character refers to them as 'daisy's' towards the latter part of the film. I could probably over look these elements but the movie has issues in terms of structure and poor pacing. Indeed, I think the biggest complaint from critics both at the time of its release and modern critics is that the overall pacing of the film is sluggish and, there are scenes that are fun to watch, they simply don't add to the story nor does it drive the narrative forward. This is frustrating because whatever fun the movie injects is ruined by scenes that just bog things down. Also, the things starts out fairly light hearted yet tonally shifts into a bleak Peckinpah film towards the end. Its a pretty jarring transition and, again feels sloppy.

There Was a Crooked Man is charming and, though it has its share of issues I was dazzled by the great cast. Though, I will be honest and say the bloated runtime almost makes it a chore at times.

Sound: Crooked Man has a DTS 2.0 track. Dialogue, score and effects come through clearly. No audio drop out or unwanted background noise to report.

Extras: Featurette; On Location of "There Was a Crooked Man" (10min) a fun vintage featurette on the locales of the film. Also features some interviews and behind the scenes shots.