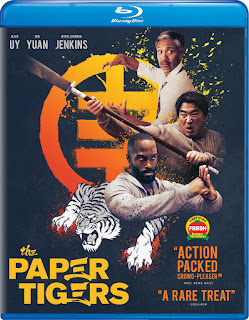 The Paper Tigers (2020) is a film that I actually had been quite excited for after seeing the trailer for a previous Well Go release. I had also heard rumblings from other fans that it was a fun outing. And, I am pleased to report that the film's hype is well deserved. The movie tells the story of three-young man that learn kung-fu (though pronounced gung-fu) under a legendary master. We are lead to believe that this grand-master only took three disciples known as the three tigers. Flash-forward the tigers are now middle-aged men but are reunited when the master dies of a supposed 'heart-attack'. And, you can probably guess where this ends up.

The Paper Tiger is an interesting subversion of the under-dogs story. Like, the top-students wouldn't be the under-dog in a classic Karate Kid movie. Yet, as the crew disbands they naturally drift away and then life and in some cases kids and bad marriages get in the way. This is where the tigers have to get back to their former glory. Writer/director Quoc Bao Tran does a fine job at world-building that doesn't have to do a lot of heavy-lifting in terms of tons of needless exposition dumps. The film also does a fairly good job at balancing humor with the more serious moments. Overall, the films themes (more about that later) works to drive the narrative forward and are for the most part organically weaved into the story. There are some moments where I thought the comedy fix really well and I think it helped land on a consistent tone. I also have to give a big shout-out to the cast and everyone seems to be on the same page in terms of acting style and chemistry.

So, the movie is far from perfect and, my regular readers will know that, even with movies I like I don't get into the hyperbolic world of film-discourse. Remember its OK to point out flaws in films even if they are overall quality outings. As solid as the writing is it felt like certain aspects (that are hard to go into depth without spoiling major plot lines) of the screenplay could have used another treatment. Also, even though the pass is pretty-good I still think that things could have been streamlined better. And, you have standard stuff like plot conveniences and plot holes. Also, the themes tend to sway towards the heavy-handed cliched. Again, that might seem nick-picky, and you honestly cant blame a screenwriter for using short-hand. But, its always nice when someone is clever enough to subvert tropes. Having said that, and again without spoilers-the movie does end with something I didn't expect.

Your mileage may vary on the above issues. I found enough likeable charm and solid writing to help gloss over some issues both in structure, pacing and narrative.

The Paper Tigers may stumble in some areas but it manages to dust itself off and come out on top!

Picture: The Paper Tigers is another in a long line of very nice Well Go transfers. The movie isn't what I would call a visual feast but its a solid looking film especially on what I assume was a tight-budget. The 1080p transfer has a nice clear clean look without any blurring nor does things look flat and lifeless. This even has some grainy-ness that gives it a rich film-like look.

Sound:  Paper Tigers has a very robust DTS 5.1 track. A movie like this that is more action forward needs a robust track and I think what we get is just that. Very nicely done.

Extras: Paper Tigers has some nice bonus features including Behind the Scenes, Deleted Scenes, and, my favorite Bloopers. Also includes the original trailer.