The Howl of the Devil (1988) Mondo Macabro Blu Ray Review 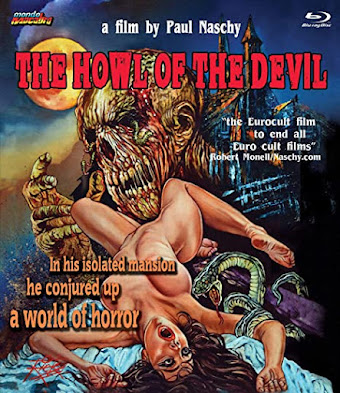 The Howl of the Devil doesn't waste a second of time with a throat slit in the first literal minutes of the film. In fact, the credit is ran over the dead woman's body. Subtle this movie is not. An out of work actor in B-horror films who lives in a creepy mansion is slowly loosing touch with reality. Meanwhile his nephew lives with him and starts to get nightly visits from various iconic characters in this out-of-its-mind Euro cult flick.
I recently watched Spookies (1986) which is a charming, fun deeply insane and ultimately confusing  mish-mash of ideas and plots stitched together.  Well, The Howl of the Devil may just be the Euro cousin and is possible the most bonkers Naschy film I've seen (and thats really saying something). As I alluded to the movie is really confusing and feels like its trying cram in as many sub-plots and even horror sub-genres that it can. For example, it has supernatural elements, but its also a slasher and even feels like a weird Euro priestsplotation thrown in for good measure. I kept the plot vague because it really would have taken far too long to go-over everything that Naschy throws into this chaotic cocktail. It's certainly a movie that plays like a fever-dream and doesn't concern itself with silly things like plot or logic. And, you know what? I'm fine with that.
It also has a cool kind of meta-ness about it as Naschy plays a washed up horror actor. This leads to a fun moment where Naschy's film  Panic Beats (1983) is featured (also available from Mondo my review HERE). Not to mention its a hell of a blast seeing Naschy don iconic Universal monster/iconic characters makeup (which is actually pretty well done.)  The movie also really ramps up the gore which is set at a 11. And, of course there is plenty of bare-flesh on display. Howl has a very surreal visual style that further enhances its off-beat charms.
The Howl of the Devil might be a mess of a movie but damned if I wasn't totally transfixed by its balls-to-the-wall go-for-broke lunacy.
Picture: Howl of the Devil is another home run for Mondo! Us fans are treated to a new 4k scan. The image is considerably brighter making but thankfully doesn't look over processed or worked. Colors really pop and the image retains an overall nice amount of detail in the costumes, wonderful locales and sets. Grain is heavy but I think its not chunky or distracting. I was also impressed by how scratches and artifacts have been cleaned as well. Mondo has been really been doing impressive work and this reflects that!
Sound: Like the visuals, Mondo provides a nice 2.0 track. Dialogue, score and sound design comes through strongly and there are no issues without unwanted background noise or drop-out issues.
Extras: Mondo, as always provides a nice selection of extras including: A audio commentary by Rod Barnett and Troy Guinn of The Naschycast. Adrian Speaks A brand new interview with Sergio Molina (36mins),  Making of Howl of the Devil (27mins) Taken from a rare VHS this making of is a really interesting glimpse into the behind the scenes w/interviews and of course rare footage of Naschy directing.  And of course the Mondo Macabro Trailer Reel.
Posted by The Video Attic at 10:08 AM