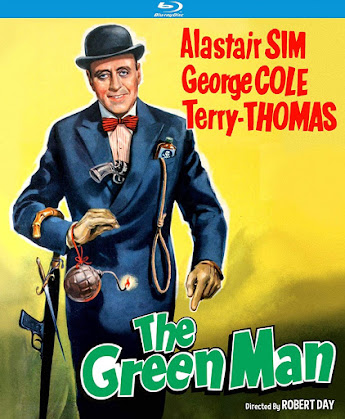 I've had the pleasure of discovering a lot of Alastair Sim films thanks to Film Movement's HD set Alastair Sims School for Laughter (Review HERE). Previously I had only seen him in Hitchcock's Stage Fright (1950) and of course, the Holiday classic A Christmas Carol (1951). The Green Man (1956) marks another Sim's film I am happy I got a chance to watch (twice now including a re-watch w/commentary). In this film the odd-ball Alastair Sim's plays a whacky assassin whose plans are discovered by of all people an energetic vacuum salesmen named William Blake (George Cole). Hijinks and hilarity ensues as William aided by Ann (Jill Adams) must stop the plot in time.

Madcap is the best way to sum up Robert Day's The Green Man. Frank Launder and Sidney Gilliat best known for penning the excellent Hitchcock film The Lady Vanishes (1938) turn in a darkly sardonic, high energy comedy that in my opinion ranks among Sim's very best films. Day employees a nice amount of physical humor but also delivers chuckles from witty dialogue that is dry but effective. I also have to give this movie a lot of credit for being a nearly breathlessly paced film. Again, Gilliat and Launder provide no filler and everything presented is in service of the plot.

Alastair Sims is of course top-billed here but sadly he is not featured that heavily. He is of course dazzling when he is on screen and makes his job seem effortless. George Cole is tasked with carrying the bulk of the film both in terms of action and energy. Cole really steals the show and thats no small feat when you have heavy-hitters like Sims and Terry Thomas. Speaking of which, Thomas comes in pretty late into the film but, as always really brings a hilarious stiff-upper-lip British character that would come to define the roles he played. Horror fans will probably best recall Thomas from the Vincent Price horror film The Abominable Dr. Phibes (1971) and mainstream fans will know him from Its a Mad, Mad, Mad, Mad World (1963).  Jill Adams plays opposite Cole for a lot of the movie and does a wonderful job at matching his energy without over-playing or under playing the situation.

A whirlwind of screaming hilarity and among the best of the '50s era comedies. If you've never seen this film its a real delight.

Picture: The Green Man is another stunner from Kino! This film is sourced from a brand-new 4k scan. The film itself which is over-sixty years old looks crisp, clean and most all of the artifacts and scratches have been cleaned up. There is some faint lining in the print but its so faint that you`ve have to be looking for it specifically to pick up on it. The black-and-white also has a nice contrast and thankfully doesn't look too-bright washed out on a 4k television. Furthermore, I was impressed by how fine details in the film seem to leap out at you.

Sound: The Green Man features a DTS 2.0 track. Dialogue comes through nicely as does the music and sound design. There is no unwanted background hiss or noise nor is there any audio drop out issues.

Extras: The Green Man features a commentary by author and historian David Del Valle. Valle does a wonderful job at navigating the audience through the history of the actors and the production. Its worth noting that this is the second commentary Del Valle did on a Sims film (check out his track for The Inspector Calls from Kino). As always David (a legend in the film historian world) is so extremely well researched and most important so engaging. The deep dive on Sim's himself the man and his career is really impressive. Again, David really puts in the work and it shows! If you've never listened to a Del Valle commentary you are in for a treat!

Rounding out the features is a series of trailers.