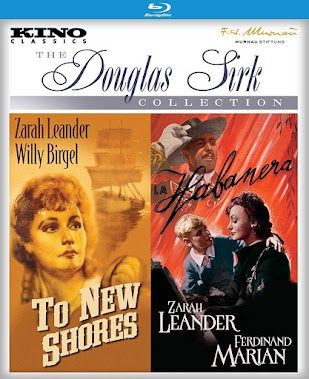 To New Shores (1937)
Directed By: Douglas Sirk
Starring: Zarah Leander, Willy Birgel, Victor Staal
To New Shores from 1937 marks an early film from Douglas Sirk who was still working in his native country of Germany. Set in 1846 a dancer named Gloria (Zarah Leander) takes the rep for a crime she didn't commit all for her boyfriend Sir Albert Finsbury (Willy Birgel). There is a loop-hole where if prisoners with good behaviors should marry they would be set free. Finsbury learns of this but ends up being pressured not to marry the woman. Instead she marries another man named Henry (Victor Staal) and a tragic love-triangle forms.
If you anything about Douglas Sirk, you`ll know that he his brand was over-dramatic at times overwrought films. Its not that the director didn't explore other genres but he was best-remembered for his dramas. Though this is an early Sirk film (under his name Detlef Sierck) it certainly has his trademark style both thematically and style wise. The film, as you might expect is dripping with doomed-romance, enough to make the great Tennessee Williams envious. As for the plot, I think that overall its a very solid script that, while maybe a little over board on the dramatics still offers a compelling enough story.
The pacing is also well done and the movie never felt like it relies on padding. The leads are great with Zarah Leander doing a great Garbo whilst also injecting her own talent, beauty and charm. From a technical standpoint the film is wonderfully shot by Franz Weihmayr who gives the movie a grand scope and feel. Not to mention uses some beautiful compositions and moody camera and lighting to really elevate the material further.
To New Shores is rough around the edges with aspects of the story that I felt could have used a tighter focus. This is something that I think certainly improved with other later Sirk films, especially his American outings. I actually thought it would have been great if Sirk remade this. Still, I enjoyed this movie and I liked seeing Sirk working in his native country.
Picture:  To New Shores looks fantastic in 1080p. I could have sworn this was at least a 2k if not 4k scan but I couldn't find anywhere where it says that. Even for a standard scan this movie really has a nice clean look to it. Its not totally artifact free but its very close to it. Grain is smooth and not chunky. Furthermore, the black-and-white has nice depth and contrast. If I had a minor complaint it would be that the image isn't as sharp as it could be. Not enough to be distracting though. Overall, a nice visual presentation.
Sound: To New Shores features a 2.0 track. The films dialogue comes through nicely and in large there is no unwanted background noise present. A very solid sound presentation overall.
Extras: To New Shores features a new commentary track by Josh Nelson. Nelson is very well researched and I found the overall track an engaging one.
La Habanera (1937)
Directed By: Douglas Sirk
Starring: Zarah Leander, Ferdinand Marian, Karl Martell
I will warn you upfront: La Habanera contains a bullfight scene which leads to animal cruelty.
Released the same year as To New Shores, La Habanera tells the story of a upper-class woman who falls in love with a man during a holiday to Puerto Rico. She leaves her entire life behind despite protest from her Aunt. Ten years later she is unhappy in a controlling relationship.
So, I am if anything very honest when I review films. In that spirit I have to say that I found La Habanera to be a challenging watch. The movie is at its best when it focuses on the relationships but, it also has a big sub-plot about a fever going through the village. While yes, this is important to the narrative it felt like this aspect of the film bogs everything down. Not to mention not much happens and I found the characters for the most part unlikable and, therefore hard to connect with them.
Worst yet, the film has this really uncomfortable underpinning of Nazi propaganda. Keep in mind this was made at the height of the the Third Reich and they focused a lot of making movies with their stomach turning 'ideals'.
Zarah Leander is again doing her Garbo impression but is, as always talented, lovely and gets to show off her skills at singing. Though I must admit it was kind of jarring when this turned into a musical for little bit (at the almost hour mark). Franz Weihmayr once again gives this movie a grander feel with his wonderful, moody  photography.
By far not top-trier Douglas Sirk and setting aside its agenda, its a slog to get through despite good performances and stunning camera work.
Picture: Much like To New Shores this doesn't appear to be a 2k or 4k scan through it looks like it in my opinion. The image has a nice clarity to it, especially given its age. Having said that the movie looks a little rougher than Shores in terms of artifacts and some light image flicker. Again, I don't think its bad or even distracting.
Sound:
Extras: La Habanera has a commentary by Olaf Moller.
Posted by The Video Attic at 9:30 AM