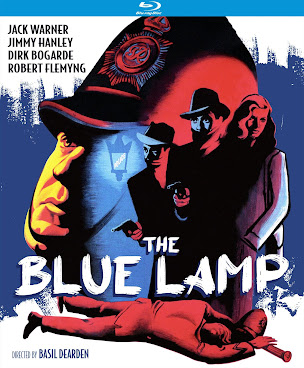 The best way I think to sum up 1950's The Blue Lamp produced by the legendary Ealing Studio and directed by Basil Dearden (someone EVERY film buff should know) is the British equal to The Naked City (1948). The film follows the day in the life of British cops. The daily grind is halted when a cop is gunned down in the streets. The investigation heats soon heats up in this seminal English cop-drama.
Its only been semi-recently that I discovered Ealing films, which, primarily are remembered for their comedies like Kind Hearts and Coronets (1949) and The Lavender Hill Mob (1951) (a personal favorite). Though, they certainly did a lot of stellar dramas like The Blue Lamp. The film which clocks in at a brisk eighty-five minutes does a great job at establishing characters and making the entire thing feel like a real lived in world. The film really benefits greatly from a hearty screenplay by T.E.B Clarke who was nominated for three Oscars in his career, winning one for The Lavender Hill Mob. Clarke sprinkles his trademark dark sense of humor and whip-smart and tight plotting. I also liked that Dearden injects a lot of dark humor and social commentary into the mix. It may be a slower burn as cop-dramas go but I think that once it gets going its a engaging watch. Dearden of course gives the film a polish and focus that keeps all the moving pieces working like clockwork.
If I had to complain about anything its that some of the scenes play out a bit too over-the-top for their own good and bucks up against a film that is mostly grounded. Lamp also marks one of four films that Dirk Bogarde and Basil Dearden made together. Bogarde as always does a fantastic job and effortlessly sways from charming to menacing and, damned if you don't like him despite how much of a scum-bag he is. And, of course Jack Warner and Jimmy Hanley also pull off a very solid performance in their respective roles. On a technical level the movie has heaps of atmosphere and DP Gordon Dines using low-key lighting gives the movie a gritty Noir-like feeling which the kind thrives on. Not to mention some really inventive and interesting camera work.
If you never heard of The Blue Lamp and you are a film of film-noir and police-drama's this is certainly one to check out. In my opinion, like a lot of Dearden, this is an overlooked gem and a nice entry point into the legendary output of not only  Ealing Studio but Basil Dearden!
Picture: The Blue Lamp was restored by StudioCanal and is stellar work! The film has been cleaned up considerable and there really isn't much of any artifacts, scratches etc. Clearly, this movie was well taken care of in terms of original material and the 1080p end result is a nearly pristine looking print. Even grain has been smoothed out and not chunky.
Sound: The Blue Lamp features a DTS 2.0 track. Dialogue score and sound design comes through nicely and, has an overly robust quality to it.
Extras: The Blue Lamp has a nice array of features. Included is a commentary by historian, author  and Entertainment journalist Bryan Reeseman. As well as a partial audio commentary by writer Jan Read and Academic Charles Barr. Both commentaries have a wealth of information and, as someone who is trying to explore more British cinema I was really engaged.
We also get a Locations: Featurette with film historian Richard Dacre (13mins) Dacre not only shows us around but gives some great background information.
BBC Radio 3 The Essay: British Cinema of the 40s: The Blue Lamp Audio Featurette (14mins) Again we get some fantastic historian context and information which helped me like this movie even more.
Posted by The Video Attic at 11:34 AM