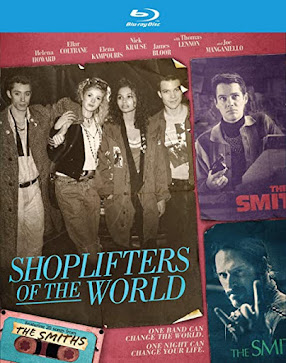 Disclaimer: RLJ Entertainment  has provided me with a copy of this film free of charge for the purposes of review. All opinions contained within are my own honest reflections.

On the eve of adulthood a group of teenagers from Denver Co. mourn the breaking up of The Smiths. They throw one last party before everything in their lives change. Shoplifters of the World is clearly trying to capture that 'one-last night' before adulthood feeling. But, does it work? While I have to give Kijak credit for giving us characters that have some depth (which might be charitable) the plot itself struggles to connect. Its worth noting that writer, director Stephen Kijak is primary a documentary filmmaker (on music-no shocker) having only one other non-documentary film to his credit besides this titled Never Met Picasso (1996). I only mention this because  clearly Kijak wants to build a cinematic shrine to The Smiths but sadly takes over the narrative. Shoplifters wades through a series of teen-movie angst clichés and the film only has the flimsy 'look at all the Smiths songs we have' to hang its hat on.

There is also something that rings phony about this film. For example you have one character railing against boy-bands. This would be fine if not for the fact that director Stephen Kijak did an documentary entitled Backstreet Boys: Show`em What You're Made Of (2015).  Worst yet. there is something about Queer culture that it also fails to capture. The group of friends go to a gay-club and it frankly just feels like part-pandering-part Queer tourism. I say this because prior to this the movie only slightly flirts with LGBTQIA themes but never actually goes there. Mix in a bunch of homophobic slurs on top of and its pretty cringe-worthy. Again, it adds to this feeling that there is nothing authentic in this film.  The other issue is the acting. While the performances are for the most part solid not everybody seems to be on the same page in this regard.  I think its Stephen's lack of fiction direction that is probably the issue.

The problem is Shoplifters never offers anything new to the discord nor does ever feel like it engages with its audience. Its painfully desperate to ride the nostalgia wave. But, at least its fun to listen to.

Sound: Shoplifters of course features a lot of music, mostly The Smiths so I was happy that RLJE provided a nice DTS 5.1 track. Music comes through robustly as does the dialogue and sound design.