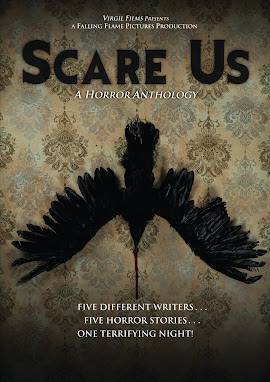 There has been a lot of truly great horror anthologies with Josh Ruben's excellent Scare Me (2020) and Ryan Spindell's The Mortuary Collection (2020) being some prime recent examples. 2021's Scare Us is a recent release that looked promising but does it really terrify?

The first segment is Night Haul. The story is really simple, (a recurring theme) a woman is at a storage locker just before it closes. She encounters a bloody priest and, as you can expect things goes to hell after that. I have to say that the opening segment didn't inspire much hope in me. The story is underwhelming and it felt like the narrative was built around the inexpensive nature of the locale rather than the other way around. Its pretty forgettable as Charlotte Lilt and Ryan Henry Johnston give us some interesting visuals but lacked any scares or more to the point, imagination.  I will give the filmmakers credit for making good use of the claustrophobic space. Overall, a pretty forgettable entry.

After that is Untethered. A police officer's family is seemingly infested by an unknown evil force. Untethered feels like it so badly wants to be an Ari Aster movie. Yet, it lacks the depth and nuance to achieve that.  Dead Ringer is next. One night a man encounters a broken down empty car and gets more than he bargains for when he investigates.  Again, the short feels like it has some lofty ideas but not the budget not writing skills to back it up. They attempt a creature but only show it from the back. The final segment is The Resting. In the wake of her mothers passing a woman learns the awful truth about her family. If Resting sounds familiar its because it takes a lot story and visually from Ari Asters Hereditary.  Its so divertive its embarrassing.

There is one 'bonus' story that weaves the wrap around segment together. I won't spoil it, just to say that its rather predictable. Maybe worst yet it "borrows" from AHS. The biggest issues with this is it doesn't have the time or budget and, yes, talent to pull off the lofty ideas the film is trying to pull off. It also really doesn't help that it feels like they are cribbing other styles and story beats from better films and filmmakers like American Horror Story: Asylum's, the works of Ari Aster etc. I always try to say something nice and, I will give the filmmakers credit for producing some nice images and the camera work and production design are actually really nicely done.

Ultimately, bad writing not budget sinks this film and, I think it has a pretentiousness that takes away some of the fun this could have had. It wades through a sea of horror clichés and maybe worse of all very similar plots to other better works. It's by far not the worst film of its ilk I've seen and, I can tell that some thought and skill went into this. However, it just does not compare to some of the amazing anthologies that has been coming out in recent years.

Picture: Typically I try to only review HD/UHD stuff but I don't look up my noise to DVD. Especially when most newer cameras mean that even in low-def things look pretty good upconverted. Sadly though, I could notice a overall lack of clarity watching this on a 4k TV. Things far away lack any definition and, its a shame because when this movie lacks in story it makes up for by being well shot (for the most part). It also weirdly is grain heavy which you typically only get with older films being re-mastered. I chock this up to the cameras and the conversion to DVD.

Sound: Scare Us has a pretty decent DTS 5.1. This movie doesn't exactly have a great sound design but having said that the 5.1 does offer a nice robust sound. Dialogue such as it is and score, sound design comes through nicely.