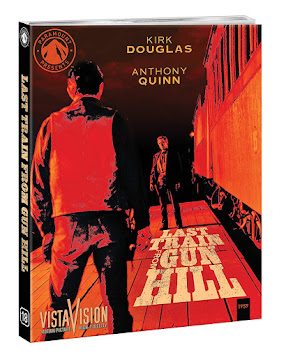 Paramount Presents #18 celebrates a classic of the western genre, Last Train from Gun Hill (1959) starring Kirk Douglas who sadly passed away last year at aged one-hundred and three. Truly, we lost a living legend but, of course he lives on in his stellar films. John Sturges was one of those directors that I don't think gets discussed nearly enough. Indeed, even having made some many classics he never even won an Oscar and, was only ever nominated but one time for Bad Day at Black Rock (1956). A Marshall named Matt Morgan (Kirk Douglas) seeks revenge after his wife is sexually assaulted and murdered. The man who did it just happens to be the son of Matt's best friend Craig (Anthony Quinn). Friends turn to foes comes to blows in a epic showdown.

Sturges expertly fuses westerns with a revenge thriller narrative that seems like it would feel perfectly at home in a '70s Grindhouse. Yet, he along with Oscar winning screenwriter James Poe (Cat on a Hot Tin Roof) pulls all the stops in crafting an epic scaled, deeply human tale that runs a lean-ninety-four minutes. This means the pacing is breathless and every scene is working towards driving the narrative forward. No filler, all killer.  Last Train feels so steeped in classic western iconography yet its frank themes of revenge and brutality give it an edgier feel. The Hays code was sadly still very much in effect (though its powers were weakening) and, thus I think its why the film still feels like its playing it safe in certain aspects. The great DP Charles Lang gives the film a huge scope and as always he comes up with inventive camera work that is expressive and engrossing. With costumes by the great Edith Head and a underrated score by four-time Oscar winning composer Dimitri Tiomkin (High Noon).

And, you cannot talk about this movie and not mention Kirk Douglas's performance. I will never understand why Douglas wasn't even nominated for his role as Marshall Matt Morgan. I think its among his finest roles. The actor always knew how to find the nuance and subtext of a character in a way few did. Anthony Quinn also turns in a career high as gruff but surprisingly complex Craig Belden. Quinn's an actor that is fascinating in whatever he's in and here he really gets to showcase his skills. A pre-Addams Family Carolyn Jones is also very good and can hold her own with Douglas and Quinn. You can certainly feel the films legacy on other films. Hell, you have to just look at John Wick (2014) to see the inspirations.

In my humble opinion, Last Train from Gun Hill is the last truly great American western before the counter-culture '60's would transform the entire film landscape. A-Must Watch!

Picture: Paramount dazzles with a brand-new 6k transfer from the original Vista-Vision negatives. All I can say is this looks like a UHD release only its 1080p. The level of clarity and balance in color is extremely well done and outdoor scenes especially have a pristine look to it. Details like costumes, clothing textures, locales and sets really pop here. Interior scenes have a surprising warmth to them to them.  Grain is present but incredibly smoothed. Of course artifacts and scratches have been scrubbed clean as well. It's hard to believe this movie looking any better any time soon. Easily makes my shortlist for best restoration for a classic film.

Sound: Like the visuals, Paramount pulls all the stops out for the sound with a Dolby Audio TrueHD. Sound design, score and dialogue comes through with a lot of power. I was impressed by the complex 3D presentation with a nice balance between speakers.

Extras: New Filmmakers Focus with Leonard Maltin (7min). Maltin as always does a great job at unpacking the film, the making of and its legacy with movie goers.