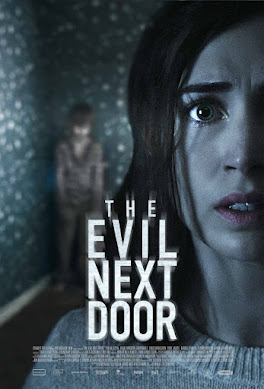 Move over America, Sweden is also getting into the "creepy' kiddies" horror-sub-genre. But, just like in the US they haven't quite cracked the code. New to her stepmom role Shirin (Dilan Gwyn) moves into a duplex with her partner, Fredrik (Linus Wahlegreen), and his son, Lucas. The new home feels like the right place to start becoming a family. But when Fredrik leaves for work, strange things are heard from the other, uninhabited side. Also, who is Lucas’ new friend? 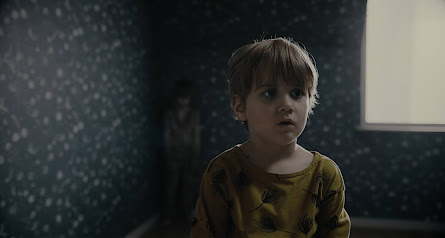 The Evil Next Door (2021) also known as The Other Side is everything you would expect from a supernatural film that relies heavily on a creepy child with an imaginary friend. This is so over played but, I had hoped that maybe directors Tord Danielsson, Oskar Mellander would bring something fresh to the discourse. Sadly, The Evil Next Door is just as generic as the title would suggest. What we get is luke-warm chills delivered by various spooky-things seen in the background amid a pretty standard-family drama. This brings me to where I feel like Evil has one its biggest missed opportunities. The film establishes very early on that Shirin is basically a step-mother to young Lucas. Had this dynamic been fully woven both narratively and  thematically it would have made for a more interesting film. It feels like they kind of try this but it's never explored fully enough to be effective. It seems like the directors focused more on setting a eerie tone and jump scares but forgot to have a compelling story with richly developed characters.

Though I wasn't a fan, I have to give the filmmakers credit for making this movie look as drab as possible and fully committing to that look. I suppose you could make the case that it helps give this movie a certain mood. And, since I always try to say something nice the movie did have some inspired creepy moments aided by nicely done camera work. I also thought the acting was for the most part solid.

I can certainly see where the filmmakers tried hard to make this a genuinely scary film. The thing is horror is a tricky genre due to over saturation. Add in the fact that your tending some very familiar ground certainly doesn't help matters. It's frustrating when I see good filmmakers struggle to make something that isn't as bland and by-the-numbers as The Evil Next Door. And yes, I think that this duo could be good even great if given the right material and budget. What we get is a woefully cliched and underwritten film that could have used a major over-haul in its screenplay. Maybe next time, guys.