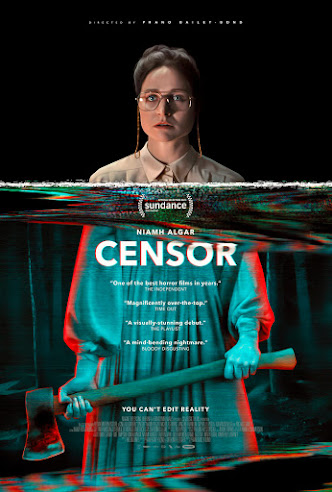 Disclaimer: Magnet Pictures sent me a free digital screener. The opinions contained within reflects my own honest thoughts on the content.

Prano Bailey-Bond's feature film debut Censor (2021) made quite the splash earlier this year at Sundance and I thankfully got to see this a few weeks back. There tends to be a lot of hyperbole in the critics circle but, I am happy to report that, in this case the product lives up the hype. Censor follows the straight-laced Enid (Niamh Algar) who works at the 'moral' cause of censoring videos during the 'video-nasties' era. Though she is calm and mild-mannered Enid is carrying around the pain of her sister mysteriously disappearing. Its during a screening of "Don't Go in the Church" that seems to suggest that the filmmaker Frederick North (Adrian Schiller) may know something about where she is. This leads the young woman down a path of low-def insanity as she gets closer to the truth.

Censor feels like it was crafted by a seasoned director with three or more features under their belt. But, as I stated above this is Prano's first feature and, that my friends is damned impressive. What is incredible is the movie is so densely layered in theme and and well thought out details. Production designer Paulina Rzeszowska (Saint Maude) along with art designer Philip A. Brown (How I Live Now) really do create a real lived in world that is drab, cold and oppressive. As the movie goes on Bond and the art crew slowly starts to change up the visual style in something that feels at home in a Bava, Argento or Fulci nightmare.  Indeed, the entire film is a slow burning, engaging mystery yet, I constantly felt unsafe and tense throughout. Prano who has stated she grew up in the 'video nasties' era  presents a very thoughtful and thankfully nuanced approach to the subject matter. For example, a lesser director may have painted the censors as stuffy and unlikable. Yet, in Censor we get to see real people just trying to do what they thought was right (as misguided as it was).

Bond also mixes social satire without ever making the piece feel overtly preachy. She also sprinkles in some dark humor and again, finds the sweet spot of just-enough without going over-board. Mix in a wildly inventive score by Emille Levienaise-Farrouch (Rocks) and pin-point photography by Annika Summerson (Mogul Mowgli) and you have a entertaining debut. If I had to maybe lobby a minor complaint its that the movie could have used a tad bit of streamlining. There is a subplot about a killer (who might be copying a video nasty film) that goes nowhere. Again, its not so bad that it de-rails the overall quality.

Censor is a skin-crawling mood piece that is engaging and one hell of a feature film debut. Not to be missed!

Look for my Interview with Prano Baily-Bond and Niamh Algar coming later this week. Bookmark for daily updates.