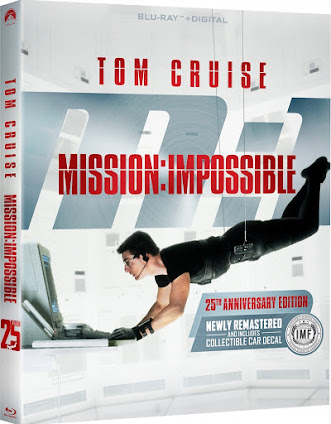 Its hard to believe that this year marks the twenty-fifth anniversary of the Mission Impossible film series. And, its still going strong over-two-decades later.  Based on the cult television series of the same name, the film follows agent Ethan Hunt (Tom Cruise) must prove his innocents when his fellow CIA agents are killed on a mission. It's hard to think that the multi-billion dollar film series was kicked off by Brian De Palma. Palma, though no stranger to big budget films, is probably best remembered for this stripped down thrillers like Dressed to Kill (1980) and Carrie (1976). Of course, the movie, which was made on an eighty-million dollar budget grossed close to half-a-billion which doesn't include its home video sales over the decades. I think that Mission Impossible had all the right elements and, was a movie that is so perfectly of its time. The mid-to-late nineties saw an influx of over-the-top action films which carried the mantle from the previous decade. But, it being close to the new millilumen things had a decidedly edgier-cyber spin to it. Thats why I think this kind of movie series, one that relied on tech and gadgets fit so well.

It was really fun to go back and re-watch the first film after having poured over the sequels many times over the years. I had forgotten just how interesting and even balls-to-wall the production design and visual style was. DP Stephen H. Burum (who had been working with De Palma on-and-off since 1984's underrated Body Double) gives the movie a off-beat sense of style with strange dramatic camera angles (along with Dutch angles) but, also gives the movie a big bold scope. Indeed, Burum highlights the various shooting locales like the Czech Republic to its upmost effectiveness. Couple this with amazing stunts, breathtaking tension and a iconic score by Danny Elfman (Batman, Beetlejuice) and you have a fun, gripping popcorn movie that has thrilled countless audience members.

And, the fact that I was eleven when this came out also gives it a nostalgia factor, not to mention the novelty of using the Internet as a major subplot is everything to me. De Palma gives the movie I needed edge and flare over the Bond films and, I think injected some tongue-in-cheek playfulness that would to various degrees carry over into the other entries.

Mission: Impossible is pure escapism with a mid-nineties camp factor that the filmmakers were mostly certainly aware of. Thrills, action hacking and with the keen of of De Palma this flagship series kicked off with a bang!

Picture: Mission: Impossible is simply put a stunning HD presentation. Right away you notice an overall sharpness in locales, clothing and sets and the brilliant photography by Stephen H. Burum (The Untouchables). The picture also has a nice warmth to it which retains that mid-late '90s style remastered in a HD format.

Sound: Like the visuals the sound presentation is also very solid with a Dolby TrueHD 5.1 track. A movie that is as action packed as M:I is going to need to pack a big punch and I think that this 5.1 does the trick. It's not perfect but, in my opinion you get a nice depth in sound, effects and that killer score by Danny Elfman (Beetlejuice, Batman).