Marlene Dietrich's The Woman One Longs For (1929) Kino Classics Review 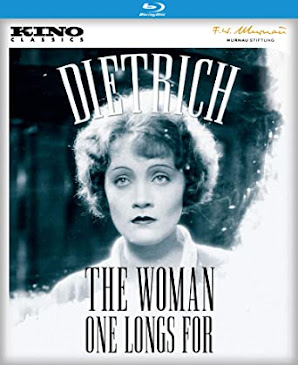 The Woman One Long's For (1929) also known as Three Loves tells the story of a young man that gets tangled up in a dangerous love-triangle involving the beautiful Stascha (Marlene Dietrich). This film comes comes at a period in Marlene's career where she was sought after but wouldn't reach superstardom until 1930's The Blue Angel directed by Josef von Sternberg and released the following year. Almost overnight the actress captured an international audience and it wouldn't be long until Hollywood came knocking.
I have come to regard early German films as the best in terms of inventive storytelling. This movie is certainly no exception. With amazing editing with features cross-cutting, graphic matches as well as dissolves and wonderful camera angles/techniques, Woman One Longs For is a marvel on a technical level.  Bernhardt truly pushes the boundaries in filmmaking having come from a country that was always on the cutting edge of the artform. There is a dreamlike quality to some of the sets which put me in mind of the genre work coming out of the German expressionist. For example, the factory headquarters has a strange architecture that is moody and atmospheric.   As for the story, its a very engaging and there is enough going on to keep one interested. Though it has a enough over-the-top melodrama that might make Douglas Sirk blush.
Director Curtis Bernhardt is certainly someone who liked to showcase strong women characters. You see this in his later films like A Stolen Life (1946), Possessed (1947) and Miss Sadie Thompson (1935) just to name a few. Here is an early example of that archetype. Rather fitting Curtis introduction of the Dietrich's character in a very dream-like manner, full of mystery and desire. After that you cannot take your eyes off of her. Though Dietrich's acting would mature over time she is still dazzling in the lead role. All of the actors are really good including Frtiz Kortner and Uno Henning.
The Woman One Longs For is a incredibly well made film. It is no shocker that Curtis Bernhardt would be among a wave of German directors that fled the rise of Hitler to come to Hollywood. If you want to see an early example of Dietrich and Bernhardt films this is certainly a good one to watch.
Picture: This may be one of the best looking silent films I've seen. It was restored in 2012 by the Friedrich Wilhelm Murnau Stiftung. The Woman One Longs For is nearly one-hundred years old at this point yet is wonderfully clear looking. Sure, you have a few artifacts and snow but this is cleaned up considerably. Not to mention any image flicker is stabilized (a issue with older films esp. silent films) and the black-and-white contrast is handled extremely well.  As I mentioned in my review this is a visually interesting early film and this new-restoration highlights this. A fantastic job.
Sound: Kino has provided this film with a nice new score by Pascal Schumacher. We get this in a nice 2.0 and 5.1.
Extras: Includes a wonderfully insightful commentary by author and historian Gaylyn Studlar. Well researched and very worth listening to.
Posted by The Video Attic at 10:49 AM