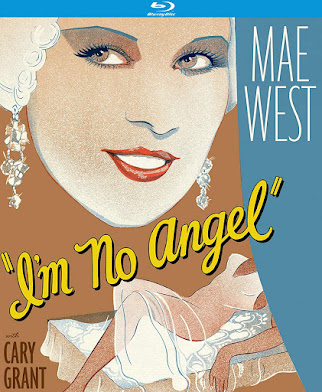 Click HERE for my other Mae West Review She Done Him Wrong (1933).
My second Mae West title, which was filmed back-to-back with She Done Him Wrong (1933). Much like the latter film, I'm No Angel (1933) was Paramount's biggest hit of the year racking in over two-million dollars (on a quarter-million dollar budget). Also a fun bit of trivia: It was reportedly Franklin Roosevelts favorite film. I'm No Angel tells the story of Tira (Mae West) a glamorous circus performer. Tira lands in some hot water after getting into a jam with a admirer. She Done Him Wrong might be the most well known of West's early films, I will say I think this film is slightly better.
West famously wrote screenplay (which is even touted not so subtly in the opening credits.) In terms of the story it falls into the trappings of a lot of early '30s films with needless side-stories and some padding. We also have to imagine the ultra-fabulous West as a fully trained lion-tamer which is a stretch even by Hollywood standards. To Ms. West's credit the screenwriter feels like a more complete film than She Done Him Wrong and has probably the most memorable dialogue of the actress's career. West also seems to be have been given more of a chance to showcase her African-American influences in the form of her musical performances. And, though its cringe-worthy in hindsight (due to stereotyping) you have to give credit to West for fighting for more screen time, hence more paid work for African-American co-stars.
But, you know what? Were really just here for the legendary, larger-than-life Queer icon Mae West. West purrs and struts' her way through this film and, you can tell she's enjoying every second of it. Travis Banton dresses West is some really lavish and inventive costumes and of course the actress brings them to dazzling life. Cary Grant once again stars opposite Mae West. You can really see the leap between the shy boy from She Done Him Wrong to the more refined and confident Grant in I'm No Angel. I kind of see this is a big step towards the Grant we would come to know and love.
On a technical level Leo Tover (The Day the Earth Stood Still, The Heiress) does a fantastic job in the cinematography department giving the movie a stylized and bigger scope and feel. I'm No Angel isn't a forgotten masterpiece but it is a fun, campy whirlwind of a movie with West further proving to her public why she was such a beloved icon.
Picture: I'm No Angel is another slam dunk for Kino! The film which is nearly one-hundred years old looks simply fantastic! Most of the artifacts and scratches have been cleaned up leaving fans with a nice crisp looking picture. Like the other West title there is a very nice contrast with the black-and-white tones and even grain levels are smoothed out. I really couldn't find much of anything to complain about here. It really is stunning looking, especially when you consider the films age.
Sound: The sound is also great with a robust and healthy DTS 2.0 track. Dialogue and music comes through strong and doesn't suffer from unwanted background noise, audio-drop outs of thin-pan audio.
Extras: Extras include a commentary film historian by Samm Deighan.
Posted by The Video Attic at 8:04 AM