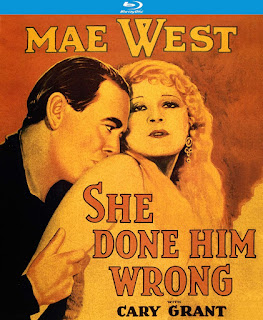 Click HERE for my other Mae West Review I'm No Angel (1933).
She Done Him Wrong (1933) was steeped in controversy before even a second of film was shot. The film was based on a rather naughty for the time play, 1928's Diamond Lil. Incredibly the play was written by West herself. The studios were cautious about even producing the play into a feature but thankfully a script was re-tooled for the film version. It was a huge hit for Paramount. (More on that w/the introduction by Osborn). The film centers around Lady Lou (Mae West) as she juggles different suiters in this Pre-Code film.
It seems rather fitting that Mae West a Queer/camp icon should have nine-films re-released for Pride Month. I had never actually seen West film before (though I was WELL aware of her) and it was quite a treat but its not without its flaws. If I'm being honest this is a pretty by-the-numbers crime drama which is certainly enriched by the co-writer of 1932's The Public Enemy John Bright. You can certainly tell this was based on a play as it feels pretty stagey and limited. She Done Him Wrong is West's love letter to the beer soaked vaudeville halls from her youth and thus the movie focuses on these aspects, though the extra film acts/numbers feels like padding.
But, real talk. Were all here for the busty-lusty smoldering leading lady. Its hard to understate just the the impact Mae West had on the silver-screen and, she is often considered among the first bombshell sirens of the medium. Wrapped in furs and literally dripping with jewels West truly dazzles and oozes sex-appeal but also had a rare agency sadly not afforded to other actresses. Tragically, this kind of sexual freedom and antimony would vanish with the Hays Code enforced in 1934. Of course this film features an early role for Cary Grant. This would mark his ninth feature since he started in '32 but, its the one that put him on the path to superstardom. Grant is of course handsome but, has a lot of charm and ease behind the camera. While he doesn't do any heavy-lifting dramatics wise he nevertheless is fantastic in the film. Of course, this being an early '30s outing you have fabulous character acts in supporting roles including: Noah Beery (Zorro Rides Again), Dewey Robinson (A Midsummers Night Dream), David Landu (Horse Feathers).
I don't mean to sell this movie short and it does have virtues outside of the cast. Oscar winning cinematographer Charles Lang (Sabrina, Some Like It Hot) gives the movie a big scope with inventive and skilled camera work. And, of course the great Edith Head did the costumes for this production. And, its amazing how this movie features two-gay characters in a rare Queer-centric (not coded) on screen depiction. Not to mention three-wonderful songs from Mae West herself! She Done Him Wrong sizzles from the heat from its jewel dripping superstar and is a must-watch.
Picture: Kino has certainly provided film fans with a stellar looking transfer. The movie, which is nearly one-hundred, looks fantastic. Though there are some artifacts the the black-and-white has a nice level in terms of contrast and the overall picture has a lot of clarity. There is no flicker in the color tempt which can be an issue with older films like this. Grain is heavy but thankfully its not distracting. I honestly cannot imagine this looking better in my opinion, any time soon.
Sound: She Done Him Wrong has a DTS 2.0. Dialogue and music comes through nicely with no unwanted background noise or hiss. The latter can be especially a big problem when it comes to older films but the levels are nicely handled here.
Extras:  Kino certainly has done Mae West right with this release! Including is two commentaries:
First we have David Del Valle. As always David provides a rich, well researched commentary. Here we are treated to a host of personal stories since Valle actually got to know Ms. West later in her life. He also got to know people who worked with her as well. Valle is one of those people who truly put in the work and earned his title of historian. If you are a film buff you will find this track incredibly interesting and engaging. The second track is from Kat Ellinger a noted author and film historian. I am also a big fan of Kat's tracks. Though Ellinger doesn't have any personal antidotes she is nonetheless extremely well researched and provides an entertaining and highly informative track.  She brings a perspective that is vital, fresh and wholeheartedly worth listening to.
Also included is:
An Exclusive Introduction by the late-great Robert Osborn (2mins)
See Done Him Right (7mins) a classic Universal cartoon featuring a cheeky parody with a Mae West-type character named Poodles. A fun addition to this release!
Rounding out the features is a series of trailers.
Posted by The Video Attic at 9:15 AM