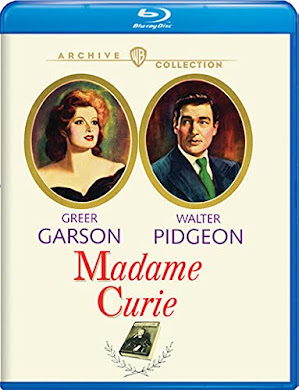 Famously, Joan Crawford lobbied hard for the role of famed scientist Madame Curie. The part of course went to Greer Garson. Legend has it this was the reason Crawford split with Mayer and went over to Warner Bros. Garson would end up being nominated for an Oscar for her role but ended up losing to Jennifer Jones for The Song of Bernadette (1944). Though I adore Crawford I couldn't imagine her in the role. As the title suggests, Madame Curie (1943) tells of the famed scientist and her husband who discovered radium. The movie was made on a rather big budget of just under two-million dollars (keep in mind this was considered large for the '40s) and made over twice that at the box-office. And, the Oscars also recognized the film with seven nominations though it didn't win any.

Over the decades Madame Curie has gained a big following among film fans and, I have to say it's every bit as well made as I heard. Seasoned director Mervyn LeRoy (The Wizard of Oz) truly does a fantastic job at directing and is able to craft a bio-pic that is engaging, tasteful and has the sheen of a master craftsmen at the helm. The production design is top-notch which is further enhanced by four time Oscar winning cinemagrapher Joseph Ruttenberg (Mrs. Miniver, Gaslight) pin-point photography. Ruttenberg, gives the film a grand, grim and moody atmosphere with Noir like lighting and inventive camera work. And, of course Greer Garson and Walter Pidgeon simply dazzle in their respective roles. Each actor gets to shine on their very own merits yet, the chemistry between the two veteran actors is palpable. The couple would make a total of eight films together and, it's not hard to see why the public loved them together. The supporting cast is also fantastic with Henry Travers (It's a Wonderful Life) and May Whitty who famously starred in the early Hitchcock hit The Lady Vanishes (1938).

Though the movie takes some liberties with the truth (par for the course) its incredible well directed with so much talent behind and in front of the camera. A must-watch.

Picture: Madame Curie positively glows in this stunning transfer. I was unable to find if this was a 2k or 4k scan but I would wager its the latter. All scratches and artifacts have been wiped clean leaving just a pristine image with depth. Black-and-white contrast is also extremely well handled further helping showcase Ruttenberg's incredible work. It never ceases to amaze me how the folks at WA can make films over seven-decades old look this fantastic. Grain is present but smoothed out nicely throughout.

Sound: Madame Curie has a DTS 2.0 track. Again, WA provides a healthy, robust audio presentation that is on par with the picture transfer.

Extras: Extras include the specialty short. Romance of Radium and a trailer.