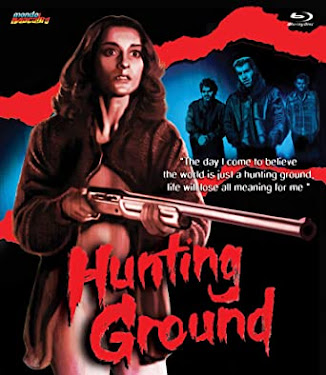 A lawyer named Adele (Assumpta Serna) spends her career defending criminals. A group of thugs ambush the lawyer, her husband and mother. A struggle ensues and the result is a gun going off killing Adele's husband. This meek lawyer must own take revenge in this Spanish thriller. Probably like most of you I only really know Jorge Grau from Let Sleeping Corpses Lie (1974). This is why I was pretty excited to see Hunting Ground (1983) also known as Code of Hunting. What this movie does so brilliantly is it sets up a palpable  mood and tone and, Grau is bold enough to not waver from that through its runtime. I also like how the perfectly lays the groundwork in terms of characters that makes the tragedy all the more profound.  Indeed, I the hunting motif whilst probably a little on the nose is, I think pretty clever way to frame the film.

While Hunting Ground has a lot of interesting things going for it, it feels a little bit too slow for its own good. As I mentioned above I respect the fact that Grau takes his time in developing characters and setting up its themes. Still, the movie feels bloated with a lot of scenes that only act as filler material. In most cases I would say that this movie just needed a trim but I think that the entire films structure needs an overhaul. For example, in most revenge films you have the inciting incident followed by the victim seeking vengeance. It takes about thirty+ minutes to get to the murder followed by a bunch of filler and then we get to another incident followed by the revenge. It feels like the filmmakers were doing heavy lifting plot wise that wasn't needed and the result is a film that seems needless overwritten.

For its faults Hunting Ground is a grim, cold and chilling revenge film that is has a finale that sticks with you long after the films over.

Picture: Mondo has provided fans with a brand-new 4k scan, and, wow, its impressive! Artifacts and scratches have been scrubbed clean and grain is smoothed out nicely. Its rare for older, obscure movies to look this good but clearly this was sourced from a nice print. The film also retains a lot of clarity, especially with darker lit scenes.

Sound: Hunting Ground includes a  DTS 2.0 English Dubbed version as well as a Spanish 2.0 w/subtitles. Dialogue and music comes through nicely without any audio drop outs or unwanted background noise.