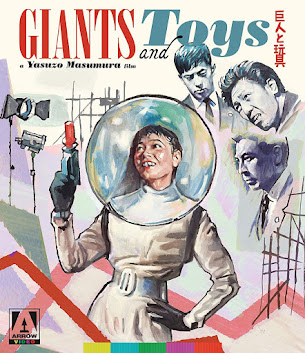 Based on a short story by Takeshi Kaiko Giants and Toys (1958) also known as The Build-Up tells the story of three big cooperation's, Apollo, World and Giant compete for sales which includes plucking a young woman off the street and making her a star with aims for her to help sale products. I have to say that I had not even heard of this film and went in completely blind, and having watched it a totally of two times (the second time with commentary), I have to say its one that grows me on me more with each viewing. While the movie is clearly meant as a broad-satire of cut-throat corporations in Japan it's a fascinating snap-shot and, as absurd as things get I can't imagine that this was too far off of reality. This soul-crashing, win by any means makes for a harrowing and deeply interesting journey and, I must say this movie had me hooked from the very first minute. This is biting satire at it's most delicious. The movie also perfectly captures the '50s era obsession with space and anything sci-fi.

The film meditates on greed, mass-marketing to children and the nature of celebrity and stardom. It manages to neatly weave all these elements in one singular brilliant narrative. Moreover, it's themes and motifs not only don't feel dated but, even more relative in today's market. In fact, it's one that would be fascinating to update and remake. Clearly Yasuzo Masumura is firing on all cylinders and employees a host of  inventive camera work and use of editing to further hit aspects of the film home. Also, I love how Giants and Toys retains this slightly surreal quality that permeates the entire thing whilst still feeling like it's grounded in reality. If I had to complain about something I wish they would have maybe taken the satire even further and maybe touched more on how this sleazy marketing impacts children and families at large.

I was impressed by Giant and Toys not only from a filmmaking level but as a savage and surreal piece of satire that feels relevant today.

Picture: Giants and Toys is presented in its original aspect ratio of 2:35:1. Giants has a pretty interesting visual presents injecting a lot color. The overall tones and kept nicely balanced without over saturating or under. It also is fairly artifact and scratch free. I will say the film isn't completely flawless (keep in mind its age) and does have some light image flickering (no doubt due to film conditions). Overall though, it looks great and Arrow as always manages to do a great job at transfers.

Sound: Giants and Toys has a DTS 2.0 track. Dialogue comes through nicely as does the sound design. Included is the original Japanese track with English subtitles. There seems to be a little bit of distortion in some parts of the track but overall its a very solid presentation.

Extras: As always Arrow provides a nice array of extras and, as always (especially with their international releases) does a fantastic job at provided supplements that offer a lot of cultural and historical context. Giants includes a commentary by Dr. Irene Gonzalez-Lopez who specializes in Japanese Cinema and pop-culture. Irene's commentary offers a truly engrossing and insightful look at the time period, work culture and of course information about the filmmakers. Also included is: Introduction by Japanese cinema expert Tony Tayns (10mins), In the Realm of the Publicists  A new video essay on Giants and Toys by Asian film scholar Earl Jackson (current Chair of Professor at Asia University in Taiwan). (20mins) Like the commentary, this video essay was so enlightening and actually enriched the film for me upon repeat viewings. Well worth checking out. Rounding out the is an original trailer. Also provided is a booklet with an essay by Michael Raine.