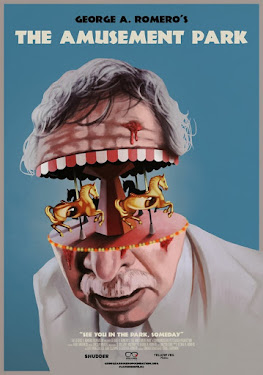 I think that the history of The Amusement Park (1973) is intensely interesting. To make a long story short: Romero was hired by the Lutheran society to director a film about elder abuse. Romero working with a limited budget and using crew his was familiar with including future Dawn of the Dead DP Mike Gornick  and Bill Hinzman (who made zombie history as the first ghoul in The Night of the Living Dead)  turned in a surreal, haunting and at times heartbreaking film. Needless to say the movie disturbed the members that commissioned the film and it was locked away and forgotten about. Romero would later make film seminal films like Dawn o the Dead (1978) and later Creepshow (1983) further cementing his legacy as a horror icon. Later the film was discovered in 2018 and with the work of Romero's family it has been released in 4k and made available to stream from Shudder, the premier horror platform. I think its really important to know the background of this film because it will help you understand my review. 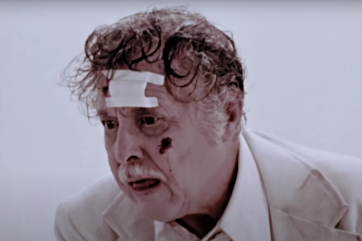 Again, I want people to keep in mind before they watch the film that this wasn't meant for a ticket-paying public, especially for the legions of fans that Romero has rightly amassed over the decades. Rather, its a near-hour long PSA on taking better care of our elderly. Its an important message and one that I know all to well. I myself have worked at a home for the elderly for five years. Its tough. It can often times be unbelievably heartbreaking. It can also be just as surreal. I went into it with this perspective when venturing into it and, wow, it certainly is a harrowing and haunting film. Though, real talk you certainly can tell that this was made for next to no money and, again its "plot" is basically boils down you, the way we treat our old is vile.  I have to give the departed Romero a lot of credit for taking a gun-for-hire job and injecting his own style and flare. The film also has Romero's signature inventive camera work and it showcases his mastery at framing foreground and background to maximum effect.
I saw some people (who saw this at early screenings) that dislike this movie and honestly, thats not really fair. Because, as I said this was never meant to be consumed by the public at large. It was only after I researched this that I could really take a step back and truly appreciate it. Romero didn't turn in a boring PSA but used his preferred medium to tell a heartbreaking and important story whilst injecting a surreal dream-like horror. As someone who had worked with the elderly for years it really struck a deep cord with me.
The Amusement Park is a harrowing, haunting and sobering PSA that felt like it lives in the same dream-like world as Carnival of Souls (1962).
Posted by The Video Attic at 7:59 AM