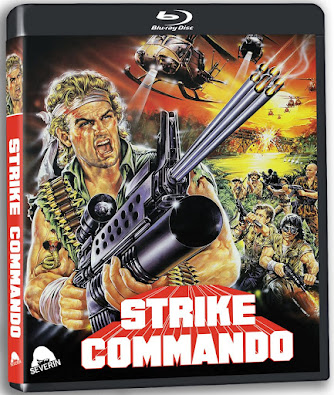 Includes the R-Cut (92mins) and Extended Cut (102mins)
Bruno Mattei is no stranger to Severin Films. The label to date has re-released almost a dozen films, most recently the infamous Cruel Jaws (my Review HERE) which came out late last year. The latest Mattei offering is Strike Commando (1986) and Strike Commando 2 (1988).  This time Bruno is "borrowing" ideas from the highly popular First Blood/Rambo series. Sgt Mike Ransom (Reb Brown) is apart of the Strike Command whose team is wiped out leaving him the lone survivor. Ransom is aided by the local North Vietnamese people. He learns of a Russian presents in the area and corrupt US officers in this wild action flick from Italian Shlock king Bruno Mattei.
Clearly this movie is a not so subtle on-a-budget Rambo ripoff but, like most Mattei films doesn't let a little thing like story get in the way of the plot. The movie is a pretty run-of-the-mill Nam-exploitation outing that features plenty of blood and bullets. Mattei is clearly aiming for high-art but thankfully the earnest, at times overwrought moments, coupled with over-the-top everything, makes for campy goodness. It's the kind of high-flying fast paced, America is so-kick-ass flick only the Italians could make. Reb Brown best known for 1988's Space Munity (made famous or infamous by MST3K) goes full ham as Ransom and, frankly I wouldn't have it any other way. His scene chewing fits right in with how heightened everything about this movie is. The bug eyed Luciano Pigozzi (Yor, RoboWars) is always a win in my book and, like Brown makes a ham-meal out of every scene he's in.
And, say what you will about Mattei's movies but he certainly tapped into what made the movies he ripped off work on a very base level. No subtext, no deep character arc's just action, some splatter and enough fire-power to make John Woo proud.
Strike Commando is certainly a rip-roaring guns blazing cheese-fest and mindless good-fun.
Picture: Strike Commando is presented in a new 2k scan. The film overall looks great with only a small amount of scratches and artifacts. Outdoor scenes really look lush and vibrant and skin tones have a nice natural look to them. Colors also really pop in an impressive way. Nighttime scenes especially really shine in this new transfer. Severin once again does some top-notch work with a movie thats over thirty-years old at this point.
Sound: Includes both an English and Italian language. Commando has a DTS 2.0 track. Dialogue comes through nicely as does sound design and effects. Some dialogue comes through with some slight distortion but, nothing that feels like it distracts. An overall serviceable
Extras: Strike Commando extras include: War Machine A New interview with co-director Claudio Fragasso (Troll 2) (19mins) Claudio is, as always a lively character and his interviews are therefore always a treat to watch.
All Quiet on the Philippine Front (13mins) Interview with screenwriter Rossella Drudi. A really interesting interview with Rossella giving us her perspective as a woman working in genre-cinema.
Also includes a rare In Production trailer as well as a standard Trailer.
Posted by The Video Attic at 7:48 AM