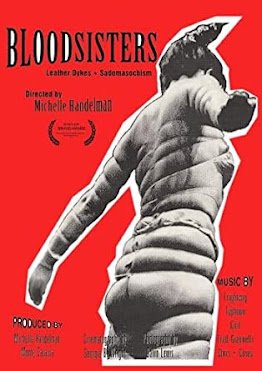 Long before the dreadfully pedestrian Fifty Shades of Grey series  brought S&M into the semi-mainstream there was Michelle Handelman's groundbreaking documentary on SM in the lesbian community entitled BloodSisters (1995) which celebrated its twenty-fifth anniversary in 2020. Ever heard of a pushy-bottom? Macho femme? You soon will in this eye-opening documentary on a subject that is sadly rarely tackled. Handelman's film is mind-blowing in how frank, honest and ahead of it's time it was. Through various interviews with a wide variety of people, BloodSisters is a informative slice of mid-'90s history of the S&M gay-community that diss-spells negative stereotypes. This film strikes a nice balance of no-nonsense honesty and positivity  It gets down to the nitty-gritty of where the line is in terms of what is considered abuse and what is consensual, fun play.  This sort of defining of where that line is, is what I thought was most interesting.

Michelle's film does a good job at explaining the different aspects of the community and lays things out like a helpful guide to new comers into this world of sexual fetish and empowerment. Also it's not only a rare historical snapshot within the lesbian leather and SM but also LGBTQ rights in America. It's interesting to hear the interview subjects talking about then President Bill Clinton. and the, at the time current political climate. This documentary is certainly not for the easily offended and the language and nudity doesn't hold back-nor should it.

The fact that a movie this honest and raw came out at all later alone in the mid '90s is nothing short of awe-inspiring. Powerful, informative and entirely unforgettable, BloodSisters is a must-watch for anyone interested in gay-culture.

Picture: BloodSisters is presented in it's 1:33:1 aspect ratio. The film was clearly shot on a low-def camera which is upconverted to DVD 720p. Normally a low-def production that was in turn also converted into a low-def format might be a problem. However, the shoddy look actually, in my opinion enhances the gritty '90s quality. You can see a uptick in color and brightness when viewed on my 4K television but of course there isn't any sharpness in the picture. Again, I think that I would almost want to retain the low-fi goodness of BloodSisters.

Sound: BloodSisters has a DTS 2.0 track. Audio comes through clearly with no issues such as drop-out of unwanted background noise. Surprisingly the audio is rather robust, especially for a low-def format.

Extras: Kino Lorber does a fantastic job at providing a lot of great extras. Included a commentary with director Michelle Handleman, Queen Cougar, and Skeeter,  is over an over of Outtakes and deleted scenes, Conversation with Frightwig (12mins) A look at the band Frightwig who did the theme song for the documentary, Converstation with Professor Jill (14min) A video essay which takes a deep dive into the historical context for  BloodSisters.  (25mins) A brand-new conversation with director Michelle Handelman courtesy of the Stonewall National Museum and Archive, 2020 Outfest Q&A with Michelle Landelman, Brendan Lucas, Queen Cougar, and Pony Lee (38min) A virtual Q&A livestream.