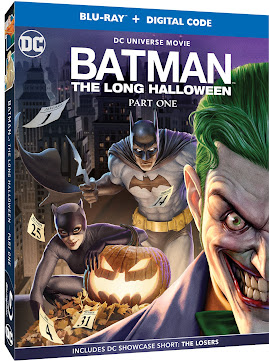 Also Check Out my Interview with Julie Nathanson HERE

Written By Jeph Loeb with art by Tim Sale Batman: The Long Halloween sent shock-waves among comic fans when it was published in 1996/97. It's widely considered among the best stories written about the Dark Knight. Comic fans had often wanted to see the storyline brought to life in some form and, that day is finally upon us. The story continues in the same timeline as Batman: Year One and tells the epic story of DA Harvey Dent (Josh Duhamel) who is trying to clean up Gotham by “bending” some rules whilst also finding himself in the middle of a warring crime family. A mysterious serial killer titled Holiday by the press has been killing members of the above-mentioned crime family, each kill taking place on a specific holiday. Batman must use his detective skills to figure out who Holiday is before the calendar runs out on him as well. Meanwhile, the Joker (Troy Baker) is not happy with having another maniac running around Gotham and aims to track down and kill the mysterious murderer.

Fans have been eagerly awaiting this one, and I have to admit that I was both excited and nervous. This is such a legendary, hell, even sacred story. Sure, elements of it had been used in the Gotham television series. Weirdly, it has never been fully explored in films until now. I can breathe a big sigh of relief that the film does justice to this mammoth tome. From minute one, director Chris Palmer does a wonderful job at capturing the dark and haunting mood of Sale's whilst also staying within the house-style visually with the other DCAU. Thankfully, the story has been kept incredibly close to the source material with only some minor omits and re-ordering of scenes. The strong drive and core themes, not to mention the detective elements, are all present and work well woven into the narrative. I'm also happy to say that the voice cast is also top-notch. Jensen Ackles (Supernatural series) don's the famous cowl and does a great job. Ackles is no stranger to the DC Universe having previously voiced Jason Todd/Red Hood for Batman: Under the Red Hood (2010) and before that had a twenty-two-episode arc on the series Smallville. Josh Duhamel (Transformers) is equally as good at Harvey Dent, and, like Ackles brings a layered nuanced performance to the role. Of course, Troy Baker rightfully steals the show with his amazing voice work as the Clown Prince of Crime himself, Joker. Baker doesn't try to copy Mark Hamill's iconic work but rather makes it his very own. Other notable talents include: Jim Pirri, Billy Burke and Julie Nathanson.

The Long Halloween, Part 1 simply should be counted among the best DCAU films to date.

Review Previously posted on Geek Vibe Nation HERE.
Picture: Warner Bros. once again provides fans with a bright crisp video transfer in 1080p. I have to say that I watched this twice in screener form (for my review) and a third on Blu ray and, wow, it looks stunning. The animation is bright in terms of lightness yet this doesn't 'over-shadow' the contrast of dark tones that help re-create Sale's iconic artwork. Colors pop when necessary but thankfully this atmospheric animated feature doesn't look overly cheery, nor does it look flat and lifeless.  An overall stellar looking transfer and, I feel does justice to overly vibes the film aims and succeeds at.
Sound: Like the picture, the sound is also really nicely done. What fans get is a robust and, in my opinion incredibly strong and complex DTS 5.1 track. BTLH pt1 is a a movie that has a lot of great action and, thus, is heavy on the side design. I noticed on my sound system a nice balance between speakers with dialogue being more on the center. Dialogue comes through nicely as well. An overall really nice sound presentation.
Extras: All treats and no tricks for the extras which includes the bonus DC Showcase: The Losers (16mins) A highly entertaining DC animated short. Certainly worth checking out!
Also includes a Sneak Peak of Batman: The Long Halloween, Part 2 (9min) A awesome sneak peak with clips and interviews with Tim Sheridan, Butch Lukic, Billy Burke, Josh Duhamel, Jensen Ackles, Titus Welliver, Jim Krieg.
Posted by The Video Attic at 8:57 AM