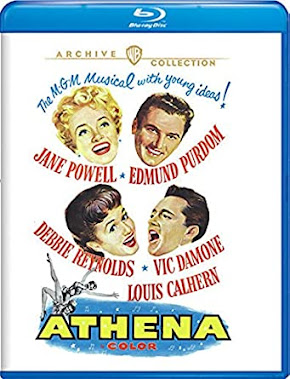 Two free-spirited sisters Athena (Jane Powell) and Minerva (Debbie Reynolds) court two fellows one of which is a straight laced man named Adam (Edmund Purdom) but Grandpa is standing in their way in this rom-com musical. Athena comes in a long line of fluffy, rom-com musicals like Seven Brides for Seven Brothers (1954). I have been on a journey to push myself outside of my genre-comfort zones and musicals certainly apart of that-as are rom-coms. Athena wasn't the biggest hit for MGM just barely making back its budget. The movie is a breezy bit of mindless cotton-candy celluloid that doesn't challenge or offend. This is by no means a bad thing and I think you know what your getting into with a movie like this.

Though the movie is a bit by-the-numbers I will say that Athena has enough quirky characters to keep things engaging enough. It also helps that director Richard Thorpe injects a lot of  high-energy into this outing.  The additional of Greek and Roman goddess motifs, not to mention the new-aged trend also gives this movie an interesting spin. Athena also has a lot of charm that is helped by some great dance-numbers and of course (for the most part) catchy songs. Jane Powell is great as the titular Athena and glides through the film making it look effortless. Debbie Reynolds of course steals the show as she lights up the entire room when she's on the screen. Edmund Purdom best known to horror fans for his role in the cult classic Pieces (1982) is also great. It also includes a great supporting cast including Louis Calhern (Notorious) and Evelyn Varden (The Bad Seed).

For being only a little over ninety minutes the movie does tend to drag in parts. For example, there is a subplot about a strong-man contest that feels like it slows the main story down. Athena may not be the most memorable musical of the '50s but it has enough dazzling songs and performances to warrant a watch.

Picture: Athena is another film re-released in 4k scan. Warner Archive really sets the bar high when it comes to their scans and Athena certainly delivers. Artifacts and scratches have been removed and the end result is a pristine picture. The color is nicely balanced and they really pop, yet, they also don't feel over done in terms of saturation. I am always blown away by how Athena which is over sixty-years old look this sharp in definition. Some small complaints would be there is some slight blurring in scenes but this is very minor. Its nothing that even begins to distract from the overall quality.

Sound: Athena has a DTS 2.0 track. Songs, music and dialogue comes through nicely. There is a nice robust sound presentation overall.